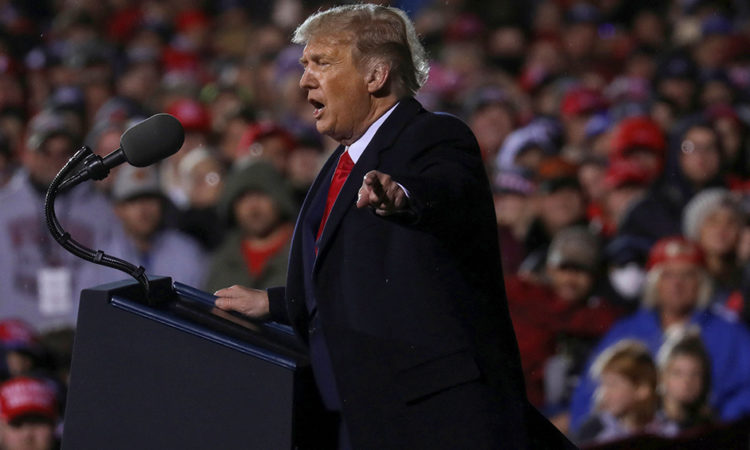 Where the president went, who he met, and who traveled with him before his Covid diagnosis.
By Peter Callaghan
October 04, 2020

Minnesota may no longer be the swing state that partisans and pundits had hoped it would be, but the capital of the North has still found a way to be center stage in national politics.

President Donald Trump and first lady Melania Trump have tested positive for coronavirus and the White House has said he is experiencing mild symptoms. Those positive tests come shortly after aide Hope Hicks fell ill on Air Force One on its return from two campaign events in Minnesota. Democratic nominee Joe Biden has tested negative for the coronavirus, his campaign announced Friday.

Trump attended a fundraiser at a private home in Shorewood where reports show that social distancing and mask wearing were not widely practiced. He then flew to an airport rally in Duluth. Flying with Trump to Minnesota on Air Force One were GOP members of the state congressional delegation, and top GOP leaders of the Minnesota Legislature also traveled with Trump while he was in the state.

One who wasn’t at either event was state GOP Chair Jennifer Carnahan, unusual in itself because she is usually in attendance whenever Trump and his vice president appear in Minnesota. “Due to a busy campaign schedule that took me to other parts of the state, I was not at any events involving the President in Minnesota on Wednesday,” she said in a statement. “We wish our President, First Lady, Hope Hicks and any others impacted a speedy recovery to good health.”

Carnahan scheduled and then didn’t take part in a 9 a.m. press conference Friday. The Republican Party of Minnesota was already in some disarray from the departure of Executive Director Becky Alery for reasons not explained by the party.

Carnahan’s husband, U.S. Rep. Jim Hagedorn, was at the events and flew with Trump Wednesday, as were U.S. Reps. Tom Emmer and Pete Stauber. All have said they will be tested. GOP U.S. Senate nominee Jason Lewis said he was in close contact with Trump and will get tested. State Senate Majority Leader Paul Gazelka said he and his wife will get tested and will quarantine for 14 days as advised by CDC and state health department coronavirus protocols. “Gazelka is feeling fine this morning. Following CDC and MDH guidelines, along with advice from his doctor, he will be tested and begin quarantining at home,” said Senate GOP spokesperson Rachel Aplikowski.”

House Minority Leader Kurt Daudt also issued a statement Friday saying his meeting with the president was outside, lasted fewer than five minutes, and that the two did not shake hands. “First and foremost my prayers are with the President and First Lady for a speedy recovery,” Daudt said in the statement. “I am not currently experiencing any symptoms, but out of an abundance of caution I am being tested again on Friday for COVID-19 after testing negative on Tuesday ahead of the President’s visit. I will remain in self-quarantine until results are received.”

Also on Friday, the Minnesota Department of Health issued a statement about the Duluth gathering: “There is a potential risk that transmission occurred at the Duluth rally and other events associated with President Trump’s visit. Community transmission of COVID-19 was high in St. Louis County prior to this week’s rally, and people attending the rally may have been infectious without realizing it.”

Republican Sen. Jason Rarick of Brook Park attended the rally, which was held just outside his district, but said he did not come into contact with the president. In an interview Thursday before Trump’s positive test was announced, Rarick said he believes the rally was fine because the state should be striving to achieve “herd immunity.” The senator went to Trump’s event with his mom, who is in her 70s, and another woman in her upper 70s.“I think people who are healthy should be out and still working and doing things like that,” Rarick said. “I think we can’t just kind of hide away. One it’s not going to end the COVID outbreak and it’s killing our economy to keep everything shut down as well.” He added: “I know some people who don’t want to be out and about and you know what, I make sure I let them know when I’ve been in a place like that, we shouldn’t have contact with each other.”

Prior to his diagnosis, Trump had a full campaign week, having been in Ohio Tuesday for his first debate with Biden and making other campaign stops. He was to have been in Wisconsin over the weekend.

Minnesota has been listed as one of the battleground states in the 2020 presidential election, having gone for Democrat Hillary Clinton by a small margin in 2016. Trump has vowed to take it this election and has appeared in the state repeatedly, as has Vice President Mike Pence and members of the Trump family. But polls have consistently shown Biden leading by high-single digits, and the Trump campaign has begun canceling TV advertising reservations, often a leading indicator of a campaign moving a state from contested to not.