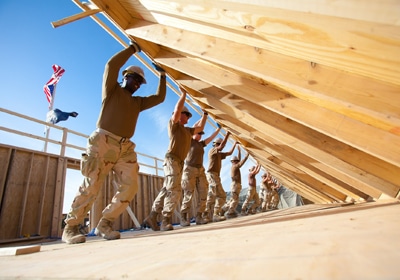 With buyer demand and the prices of single-family homes in the Twin Cities skyrocketing, residential construction rates have been ramping up over the past year.

Moreover, the number of single-family construction permits pulled has risen consistently since April when compared to monthly totals from 2015. When adding in the construction of multifamily units, approximately 465 permits were pulled in October—which is 108 more permits than a year ago.

“The residential construction permit numbers continue to show us that more families are looking to build new single-family homes,” said Meg Jaeger, president of the BATC. “With all the right ingredients in place we expect to see continued growth in that market.”

Static interest rates and the metro area’s low unemployment have fueled a seemingly unquenchable demand for affordable homes around the Twin Cities.

“We’ll need some additional inventory—particularly in the affordable brackets—in order to keep up with customer demand,” he said.

At the current rate, homes are being scooped up in an average of 55 days—the second-fastest rate of sale since the beginning of 2007.

“We heard very positive feedback from our builders during the Fall Parade of Homes and we’re happy to see the permit number reflect their optimism,” said BATC executive director David Siegel.

Energy efficient homes, in particular, have been in high demand, Siegel noted.

The state’s residential construction hot spot has been Lakeville this year, as 341 permits have been pulled in the city so far in the last 10 months. The next most-active cities for building activity have been Blaine (263 permits this year), Plymouth (243), Woodbury (237) and Otsego (171).