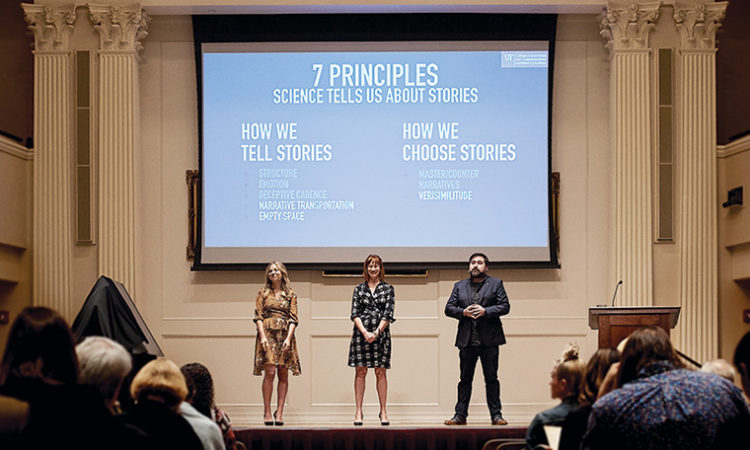 University of Florida researchers discuss the science of telling stories, which can help nonprofits.

Nonprofits will be more effective when they share narratives that build empathy and inspire action.
By Sarah Lutman
August 01, 2018

The art of storytelling has become a major training topic in the nonprofit sector in recent years. The ways we can be bombarded with information have exploded to include not only the panoply of traditional media but also dozens of new digital and social media platforms.

Nonprofits have to master new ways to create stories that rise above the noise. Their fundraising, marketing, and engagement with communities depend on honing their storytelling skills.

If you’ve taken a composition or journalism class, you know the basics of story structure and have learned tips on how to increase the likelihood that the reader, viewer, or listener will stick with a story from beginning to end.

Enter social scientists, who are learning much more about how our brains process stories, and who offer increasingly sophisticated guidelines and training for creating stories that stick, that matter, that are most likely to be retold and shared, and that inspire action.

Recently, I heard three researchers from the University of Florida College of Journalism and Communications speak at the annual Media Impact Forum in Philadelphia in May. Their presentation was about what they learned from a deep dive into the science of story building. Conclusions and examples of stories they think are great are available at scienceofstories.org.

Their insights are derived not only from their own observations of the impact of particular stories but also on an analysis of the collected research of 25 global scholars who study storytelling. These researchers gathered in late 2016 to explore ideas and to see whether they shared an understanding of what makes one story “better” than another.

The themes in the Science of Story Building project include some surprises and many interesting examples of strong stories from nonprofits and news organizations. Here are three highlights from the published insights.

Beware of stories that are mere vignettes or that you’re creating as “messages.” Instead, craft narratives—stories that have a beginning, middle, and end. If you need help establishing your narrative’s structure, consider the most common models identified by author Christopher Booker in his 2004 monograph, The Seven Basic Plots: Why We Tell Stories. (His seven are: rags to riches, voyage and return, overcoming the monster, the quest, comedy, tragedy, and rebirth.)

Why? Research shows that we interact with the structure of a narrative based on mental models of other stories we’ve encountered. When a story begins, our brains plug information into pre-existing generic models of stories that are already familiar. Storytellers can tap into this framework of familiarity and help people pay attention to the storytelling rather than searching for the arc or pattern.

Nonprofits can be guilty of telling the same story over and over; we know the ending almost before the story has begun. So even while tapping into familiar narrative structures, don’t tell the same story. Mix things up, change structures, and bring surprise and delight to the work. Have many examples in your collection.

You can think about this in different ways. We all love stories that seem to be headed one way, but instead have twists and turns, and unexpected endings. Or try leaving pieces of the story for readers or audiences to put together themselves. Don’t overstate the obvious or think that a single clear message is best, especially one that’s preachy. When the audience is engaged in discovery, more memorable stories result.

Use emotion with intention

“No one enjoys being sad,” the Florida team says, “so pulling at the heartstrings may not be the best story strategy for the nonprofit sector.” Evolutionary psychologists believe that emotions developed for a reason, because they trigger actions that have helped our species survive. “In essence, our emotions have evolved to help our brains and bodies sort out the most effective responses to a range of adaptive challenges like fleeing from a predator, fighting a foe, or pursuing a mate,” says Ann Searight Christiano of the University of Florida.

No matter how compelling it may seem to your organization to show how bad things are, it’s time to reconsider which emotions your stories trigger—and why.  Instead of disgust, fear, or sorrow, think about creating stories that inspire awe, pride, and joy. Try “turning stories over” to see how they can be reframed to evoke positive emotions, which are more likely to prompt action for your cause, rather than withdrawal.

“Psychologists have suggested that inspiring awe in your audience can open people up to new ideas, foster self-reflection, and increase altruism,” Christiano says. These are the very actions the nonprofit sector wants to inspire.

Since I heard this presentation, I’ve noticed many examples the Florida group would cite as not being helpful to advancing an organization’s causes. If you want to have an interesting team meeting, read the full Science of Story Building series as a group, then look through a couple dozen marketing, fundraising, or other materials from nonprofits in the region. See which ones seem successful and ask yourself why. See which ones are merely “on message” and which ones share a memorable story that might build empathy and understanding, create joy, and inspire action.

Annie Neimand, of the University of Florida group, cites research that shows that “people are far more likely to remember information if it reaches them in the form of a story. Good stories also have an incredible ability to reduce counterarguing on divisive issues.”

More great stories are needed in these times.