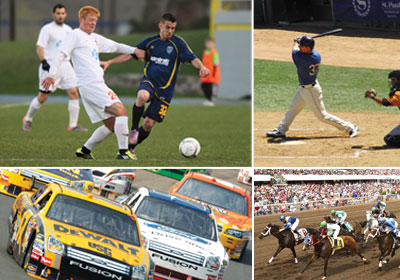 Summer is the season to mix business and fun, American style. Here are some ways to be a good sport.
By Melinda Nelson
July 11, 2011

If you and your clients have been spending too much time inside stuffy conference rooms, an all-American outdoor sporting event will recharge the adrenaline and reinvigorate your hunger for victory. From major and minor league baseball to Division 2 soccer, Nascar to horse racing, here are some rousing ways to spend a summer evening.

Minnesota Twins: Minnesota’s second season of outdoor professional baseball is in full swing at Target Field, recently named Sports Facility of the Year by both Street & Smith’s Sports Business Journal and Sports Business Daily. No worries if you don’t have a private suite—there’s not a bad seat in the house. Treat your VIP guests to a great dinner at one of several nearby restaurants before heading to the ballpark. Or venture over early and take in local food specialties served in the park, including the Giant Juicy Turkey Sandwich, a Minnesota State Fair fave since 1959; the Walk A Taco from El Burrito Mercado; the Minneapple Pie from the Atsidakos family of Peter’s Grill fame; or smoked bratwurst from Kramarczuk’s, accompanied by a Farm Girl Saison from Stillwater-based Lift Bridge Brewery. Target Field, Minneapolis, 800-33-TWINS,
minnesota.twins.mlb.com

St. Paul Saints: Take your out-of-town clients to a memorable, vintage-style ballgame. Since joining the Northern League in 1993, the Saints have become one of the most successful teams in independent baseball, drawing more than 4 million fans to Midway Stadium for a signature mix of real talent, humor, and irreverent, “only-in-St. Paul” experiences including haircuts and professional massages in the stands. Don’t miss the only walleye sandwich in the league, washed down with a frosty Pig’s Eye beer. Highlights of the July home schedule include the Gary Southshore RailCats, July 7–10; the Winnipeg Goldeyes, July 11–13; the Sioux City Explorers, July 22–24; and the Kansas City T Bones, July 25–27. Midway Stadium, St. Paul, 651-644-6659, saintsbaseball.com

Aquatennial Plaza Tennis Classic: It may not be Wimbledon, but it’s the closest we’ll have this summer in the Cities. Many of the best players in the United States Tennis Association’s Northern League will compete in men’s singles and doubles, women’s singles and doubles, and mixed doubles. July 6–8 and July 11–15. One Financial Plaza, Minneapolis, 952-358-3287, northern.usta.com

Division 2 Soccer: If you have a client with a taste for what most of the world refers to as “real football,” the NSC Minnesota Stars put on a good show. Founded in 2010 by the National Sports Center after the financial demise of the Minnesota Thunder, the Stars include former Thunder players, and 2010 league top scorers Simone Bracalello and Brian Cvilikas. Highlights of the July home schedule include the Carolina Railhawks on July 9, the Puerto Rico Islanders on July 17, and the Montreal Impact on July 22. Skip the typical stadium fare in favor of a VIP-style steak dinner before or after the game at nearby Axel’s Bonfire. National Sports Center, Blaine, 763-792-7355, nscminnesota.com; Axel’s Bonfire, Blaine, 763-398-2475, axelsbonfire.com

Horses: If your guests love the thrill of the chase, treat them to an afternoon at the races. Located 25 minutes southwest of downtown Minneapolis, Canterbury Park offers live horse racing, simulcast racing, and a card club with blackjack and other games. It features a one-mile oval track with three chutes and a 7/8-mile inner oval turf course. Inside the clubhouse are private tables offering full-menu service, TVs, and walkabout tellers that take wagers directly from your table. Highlights of the July schedule include Extreme Race Day on July 17, and Fillies Race for Hope on July 31. Canterbury Park Racetrack and Card Club, Shakopee, 952-445-7223, canterburypark.com

Nascar: If your client is one of the many millions of Americans with a passion for Nascar, an evening at Elko Speedway is a winner. Long considered the Midwest’s premier racing facility, Elko Speedway features a high-banked, 3/8-mile paved oval with outside and inside track lights for dynamic night viewing. To whet the appetite for a full-throttle evening, stop at Famous Dave’s in Burnsville for a good ol’ boy–style BBQ dinner before heading down I-35 to Elko. July highlights include the Summer Dirt Nationals, July 14–16, and Nascar All-American Racing and a live outdoor concert with vintage southern rockers .38 Special on July 23. Famous Dave’s, 12721 County Road 5, Burnsville, 952-882-9933, famousdaves.com; Elko Speedway, Elko, 952-461-7223, elkospeedway.com