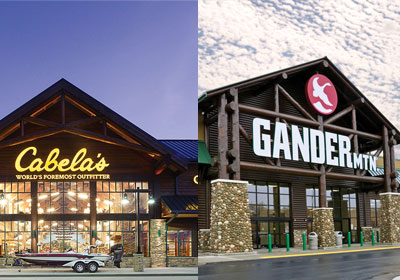 At first glance, St. Paul–based Gander Mountain and Nebraska-based Cabela’s have a lot in common. They sell many of the same products designed for hunting, fishing, and camping. When it comes to personality, both favor family-friendly folksiness and aggressive growth: “We’re going to add 10 to 12 [new stores] over the next couple of years,” said Cabela’s CEO Tommy Millner.

But the companies are polar opposites in terms of market positioning and strategy. Officials from privately held Gander Mountain declined requests for an interview. Reed Anderson, director of research for Northland Capital Markets, a senior analyst specializing in active lifestyles, says Gander, with five stores in the Twin Cities metro, “tends to be a little more of a value-oriented concept.” Customers head there for convenience and price. Already the nation’s largest firearms retailer, the company is defending its dominance in that product category. “They’ve got some new stores with shooting ranges,” observes Anderson.

CEO Millner said Cabela’s is focusing on a “smaller footprint” with newer stores, which are still nearly double the size of Gander’s new locations. As for the lodge-like “legacy stores,” with aquariums and elaborate displays of taxidermy, they serve to reinforce the company’s reputation as a prestige retailer. The 150,000-square-foot Cabela’s in Owatonna ranks as one of the state’s top tourist destinations. “We have a mystique about our brand,” enthuses Millner. “I would liken us to Harley Davidson.”

Anderson concurs, observing that Cabela’s manages to price some house-branded merchandise above what it charges for national brands. Cabela’s is “more aspirational,” says Anderson.