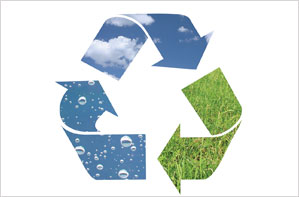 A joint effort between law offices and the federal government encourages environmentalism in the legal industry.
February 11, 2009

In March 2007, the American Bar Association (ABA) partnered with the U.S. Environmental Protection Agency (EPA) on a two-year pilot project called the ABA-EPA Law Office Climate Challenge. The project is designed to encourage law offices to conserve energy and resources, and to reduce emissions of greenhouse gases and other pollutants. The goal is for participating law firms to operate more sustainably and to help slow the progress of global climate change.

Law offices can meet the Climate Challenge by participating in any (or all) of four ways:

2 Participate in the EPA’s WasteWise program, which encourages organizations to save energy by reducing waste.

3 Participate in the EPA’s Green Power Partnership program by purchasing at least some of their electricity from renewable sources.

4 Participate in EPA’s Energy Star program, which encourages law offices to reduce energy use by at least 10 percent. This can be accomplished by buying Energy Star–designated heating and cooling equipment or by implementing conservation practices.

The four recommendations focus on areas where law firms tend to be the most wasteful—and where their efforts to change can make the greatest impact.

As of early December 2008, several hundred offices of more than 100 law firms, law schools, corporate legal departments, consultancies, government offices, and state agencies had signed onto the challenge. New groups join nearly every week, says Daniel Eisenberg, an associate in the Washington, D.C., office of Beveridge & Diamond, PC, and public service chair for the air quality section of the ABA’s environment, energy, and resources committee. Two of the adherents, so far, have been Minnesota firms.

In the summer of 2007, as the climate challenge was getting off the ground, sustainability was very much on the radar at the Minneapolis headquarters of Robins Kaplan Miller & Ciresi, LLP. The office had already formed an environmental committee that included legal administrative assistant Michelle Schroeder and associate Anne Lockner (now a partner with the firm). The committee led the push for the Minnesota office to purchase 100 percent of its power from Xcel Energy’s Windsource green power program. Currently it buys 2.7 million kilowatt hours of wind-generated electricity per year, making it one of the largest purchasers of green power in the legal sector.

Robins Kaplan Managing Partner Steven Schumeister says the climate challenge was a way to codify the efforts the firm was making. He calls it “a fascinating proposal—and kind of a fun one at the same time. What could we do as a firm to be part of assisting the environment?”

“The Challenge is really to encourage law firms to take steps to conserve energy and resources,” he explains. “From our standpoint, it was kind of an ideal way that we could make what we considered to be a step forward. It was a way we could conserve resources, reduce greenhouse emissions, and participate in a way that it was really public and would, hopefully, encourage other law firms, as well as our clients, to undertake similar initiatives.”

Schumeister says the firm decided to make green power a priority because they believed it would have the most significant impact of any effort they could make. But they viewed office paper management as a crucial second step.

“We have desk-side recycling,” Schroeder says. “Our goal under the ADA-EPA Law Office Climate Challenge is that 90 percent of our [discarded] office paper is recycled. But in addition, 90 percent of the paper that we purchase and use is 30 percent post-consumer recycled content.”

Schumeister adds that the office has retrofitted all its printers to duplex mode, so that they print on both sides of each sheet of paper. Combined with the use of recycled paper, he says, it results in tremendous savings of resources.

The point of “greening” the firm wasn’t to garner good publicity, but rather to be a good citizen of the planet. However, the firm does promote its efforts inside and outside the legal community.

“We were first in this area, as a major law firm, to do this,” Schumeister says. “We have been asked to consult with other law firms and with clients. Many of them are looking to undertake similar efforts with respect to wind power, recycling paper, and other initiatives. We’ve also continued to publicize it internally. It’s important to show all of us collectively, together as a firm, that there are ways that individually we can make efforts which will have a positive impact.”

One of the first orders of business was purchasing renewable energy credits to offset the firm’s electrical usage. “Joining this program was, in particular, inspired by some of our constituents,” says executive vice president Ann Ladd. “Being based here in Minnesota, we’ve got really strong ties and a really strong practice in the areas of wind energy and biomass energy. So we thought, ‘Of course we need to do this. We need to support our clients. We are strong in this area, so let’s show that strength.’”

Last summer, Fredrikson & Byron hired an intern who helped the firm analyze what it could be doing better in terms of its “green” initiatives. One subject that came up almost immediately was paper reduction.

“That’s an obvious place for a law firm to make changes,” Ladd says. “We all have ingrained habits of printing 60- and 70-page drafts that just end up being tossed. So while we were already doing recycling, we decided that we could do better by trying to reduce our usage. Instead of printing [single-sided copies] at all our little satellite printers, we’re trying to teach ourselves to send print jobs to the large-scale printers on each floor that have been retrofitted to do double-sided. That’s one thing the climate challenge focuses on—trying to set policies to do that.”

There are no “Thou Shalt Not Print” rules, she emphasizes; the firm is just trying to educate and encourage its employees to change their behaviors. Similarly, employees are urged to turn off their computers and lights when they leave for the day.

Other small changes have been met with just as much enthusiasm. To reduce the number of plastic water bottles generated at the office, the firm installed filtered water taps at all its cafes, and it provides pitchers of filtered water at its client meetings, conferences, and events. Instead of boxed lunches, it provides platters. Paper plates are biodegradable, and so are the plastic utensils that go with them.

“There’s nothing very controversial about what we’re doing, I think,” Ladd says. “If you took society in general, I would not claim that we are leaders in this by any stretch. There are lots of businesses that are further ahead. But we are trying to lead by example, so that other law firms and in-house law departments might see some analogies for conservation issues that they are also struggling with.”