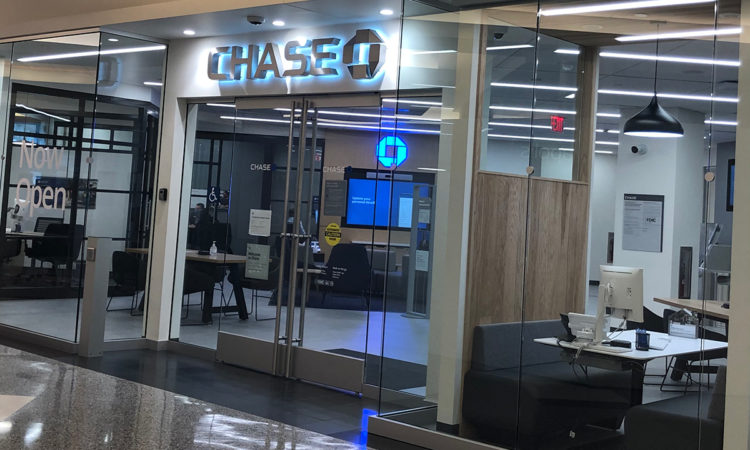 Toward the end of 2020, the bank opened three other new locations, including a new branch in the skyway in downtown Minneapolis. Provided photo

“We had a very busy fourth quarter,” said Jonathan Jensen, Chase’s market director of banking for the Twin Cities.

The downtown Minneapolis location, on the skyway level of City Center, opened on Nov. 4 – the day after the election.

“We’re very bullish on downtown Minneapolis,” said Jensen. “Opening that branch for us was really important.”

Despite the pandemic having emptied much of downtown, Jensen noted that there are many residents downtown and that Chase is focused on its long-term strategy.

Another three locations are set to open in the first quarter: Richfield and West St. Paul in mid-to-late February, and Minnetonka in mid-March. That will give Chase 10 retail locations across the metro by the end of March.

“Following that we have at least two additional locations in the Twin Cities that we’ll be opening in 2021,” said Jensen.

Chase started opening retail banking locations here in 2019. The bank’s previously stated goal is to have 25 Twin Cities outlets by the end of 2023.

“We’re well on track to our goal,” said Jensen.

The bank is also expanding regionally. Currently there are no Chase Bank locations in Iowa, North Dakota, or South Dakota. But by the middle of this year there will be, said Jensen.

The bank’s strategy for growing its retail banking presence is not just focused on Minneapolis. It announced plans in 2018 to open 400 retail banking branches in new markets across the U.S.

JPMorgan Chase chairman and CEO Jamie Dimon appeared virtually on Zoom from his home office for the ribbon-cutting event for the Ventura Village branch in September.

The three new locations that are opening this quarter are all newly built structures.

Jensen said that Chase is open to leasing space in existing properties or building from the ground up in its quest to find the best real estate sites.

Where is Chase Bank looking next?

Meanwhile, a Chase Bank media representative confirmed that the bank will open an 11th Twin Cities location in the Uptown area of South Minneapolis in ‘mid-2021.’ Chase Bank is taking a ground floor location inside the former Calhoun Square mall, which has been renamed Seven Points Uptown.