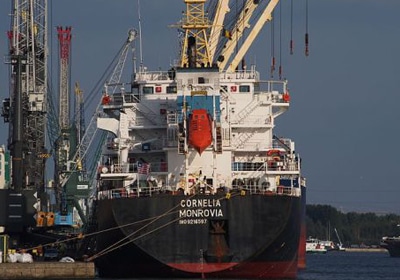 The charges follow an investigation performed by the U.S. Coast Guard last winter.
May 22, 2016

A German shipping company that owns the Cornelia, a freighter detained for six weeks in Duluth last winter, has been indicted for disposing oil-contaminated waste into the Great Lakes.

On Wednesday, the U.S. District Court of Minnesota charged MST Mineralien Schiffahrt Spedition Und Transport, the company operating the ship, with one count of violating the Act to Prevent Pollution From Ships and eight counts of false entries/omissions in records in a federal investigation.

From early November until December 18, the U.S. Coast Guard held MST’s ship offshore at the Twin Ports pending an investigation into violations of U.S. environmental regulations. During the investigation, it was discovered that on at least ten occasions from February 2015 through October 2015, Cornelia crewmembers transferred contaminated waste from the dirty bilge tank to the clean bilge tank. (The dirty bilge tank’s purpose is to collect oil and water that leaks from machinery – it is never intended to transfer that tank’s contaminated contents to the clean bilge tank.)

The indictment indicates the Cornelia’s chief engineer and/or second engineer ordered the engine room crew to not only pump the contaminated waste to the clean bilge tank, but also discharge the waste overboard on the following timeframes:

It is alleged that on at least the May 2015 occurrence, oily waste was dumped from the Cornelia into the Great Lakes. Court filings do not indicate what lake or lakes specifically were affected.

Each felony count that MST faces would equate to a $500,000 charge. With the nine counts MST has been charged with, the German company could pay up to $4.5 million in fines.

A court date for this case has not yet been set.