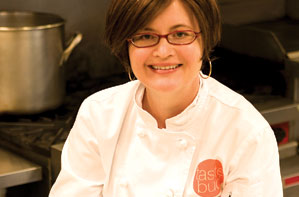 The economy may be slow, but people still need to eat. Three newer Minneapolis caterers are responding to the recessionary market by offering casual options like boxed lunches and comfort foods. These days, they say, customers are eschewing ostentatious ice sculptures and exotic fare from distant locales. Instead, they’re looking for quality and comfort—and, says Amy Brown, co-owner of Chowgirls, “that sense of not being showy.”

Case in point: Molly Herrmann, who gives her business persona the saucy moniker Tastebud Tart and combines quality with sustainability. A former nutritionist at an exclusive retirement community in San Diego, she began her food business three years ago as a personal chef to friends who liked her nutritious yet hearty approach to vegetarian and vegan meals, as well as her “locavore” (i.e., eating locally grown food) philosophy.

Last year, Herrmann was able to make the leap financially to a commercial kitchen (and a catering license) with one simple trick: shared kitchen space. Using an open kitchen in East Lake Street’s Midtown Global Market, Herrmann schedules time and works alongside nine other “micro” food businesses—and is just steps away from several of her favorite suppliers.

One of Herrmann’s specialties is preparing boxed lunches that follow her organic-and-local philosophy. Each is packaged in a biodegradable, post-consumer-waste cardboard box. “I thought it would be unique to offer healthy, specialty meals that speak to companies with similar philosophies,” Herrmann says.

As the operator of a very small and nimble business, Herrmann can change menus every week according to what’s available while keeping price points low: about $10 for vegetarian meals, $12 for those with meat. The day she was interviewed, Herrmann had just delivered boxed lunches to a board meeting of Crescendo, a Minnesota Orchestra program that seeks to attract a younger audience to Orchestra concerts. Boxed lunches make up 60 percent of her business, full catering the other 40 percent. She’s currently talking with the Three Rivers Park District to set up a quick-serve counter featuring locally grown food at the concessions area at Silverwood Park in St. Anthony.

A few miles north, in the Warehouse District, a staff of five, along with several subcontractors, run the Lunch Cube, which launched in November. This casual-catering business also makes use of an existing kitchen—in the Rosewood Room event space. Both businesses are owned by businessman Anas Abukhadra. Rosewood Room Executive Chef Jamis Scapple plans all menus.

“Food businesses have been sharing kitchen space in New York for years,” says Lunch Cube General Manager Nate Tietge. “There’s never been a space need for it here. Here, it’s an advent of a green mindset, but it also makes plain economical sense. Why would you build new when you can use?”

“Some people are like, ‘$7.95—huh?’” Teitge says. “But then when they get it in their hands, they’re like, ‘Wow—this is a giant sandwich!’” Lunches are modular, too, with side options added to the box. Even the cookies are cube shaped. When an order hits $200, the Lunch Cube advises customers to switch to platters (which accounts for about half its business).

The Rosewood Room kitchen swarms with Lunch Cube prep and assembly staff in the morning. Employees make free deliveries on bikes using custom-made delivery bags. Keeping the delivery area within biking distance of the Warehouse District keeps costs down. (There are exceptions to this close-in rule, like big customer Wells Fargo Mortgage down towards Lake Street.)

“We have a lot of repeat clients, especially those who provide a lunch not just for meetings, but for morale and the tax break,” Tietge says. “This is absolutely a recession-proof catering model.”

In Northeast, Chowgirls has based its expansion plans on that model. Founded (in 2004), owned, and operated by Amy Brown and Heidi Andermack, Chowgirls features down-home cooking, which includes items like beef stew, meat loaf, and Swedish meatballs priced at $11 for boxed lunches and more for platters, with pies, cobblers, and crumbles for dessert. Vegetarian options are also available. “The word ‘comfort’ in our branding definitely draws people,” Brown says. Hot lunches are a specialty; Brown and Andermack also do brown-bag and cold plattered lunches.

After spending two years in a tiny rented kitchen in Dinkytown, Brown and Andermack moved last year to a larger, customized kitchen in Northeast Minneapolis. They currently employ a mixed full- and part-time staff of 20, plus a roster of part-time servers. “We needed a bigger, more efficient workspace for what we had in mind: expanding our business and lunch services,” Andermack says. This part of the business has grown 70 percent since they moved.

That’s not to say they haven’t been hit by the downturn. Andermack noticed a slowdown “around the holiday season. We were doing more deliveries instead of full-staffed events . . . . We weren’t doing $5,000 parties. We were doing $2,000 parties.”

“And we were hearing a lot of things like, ‘I don’t want your staff to wear black ties,’” Brown says. “Some caterers present themselves as the optimal—you know, orchids placed perfectly on the plate. We are into abundance and value and good quality.”

Like the Tastebud Tart, Chowgirls seeks to source as much food locally as possible. Andermack and Brown also say they recycle 95 percent of their firm’s kitchen waste. Chowgirls catered for The Daily Show and The Jim Lehrer News Hour during the Republican National Convention, and provided the food at local LEED building workshops for the U.S. Green Building Council.

“We expanded our business lunches because people are still having meetings,” Brown says. “And people are conscious of healthful choices. That’s an anchor for our business.”