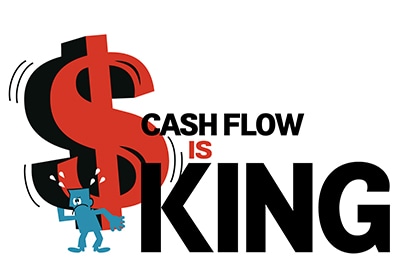 Entrepreneurs are dreamers. But before bankers will back the dream with financing, they need to see more than just an ambitious plan and blue-sky projections about future sales. A new business that’s a pure startup, with zero history of sales, is generally considered “unbankable” by lenders.

At the outset of a new company, many entrepreneurs may look to tap friends and family for funds, land a home equity loan to back the business, or try to artfully deploy credit cards, using the float as short-term financing.

But what about companies and business owners who somehow survive the tumultuous startup cycle and start to gain a little traction? Once a company starts to establish a track record, there’s a better chance of landing a loan, but if you’re running one of these early-stage companies, banks still won’t be throwing money at you. Ideally, bankers would like to see two years’ worth of detailed financial statements for your company. You will have to open up the books on your personal finances for review. You will need to sign a personal guarantee for the loan.

For a business owner who’s making the case to get a loan, the first thing many bankers will want to study is the company’s cash flow.

“That’s really the driver. That’s where we start. There needs to be positive cash flow,” says Troy Rosenbrook, senior vice president and manager of the commercial banking group for Bloomington-based MidCountry Bank. “For some small or early-stage businesses, many times they think it’s more about the collateral. And while that’s certainly important, that doesn’t overcome a business that isn’t profitable and isn’t providing a positive cash flow.”

Rosenbrook says that simply being able to point to solid revenue growth is not necessarily enough to get bankers comfortable.

“Many times you have entrepreneurs that are very focused on the revenue side and they’ve done a great job of growing the revenue,” says Rosenbrook. “Unfortunately they have not been able to grow the profitability, so their cash flow is not very good.”

What do banks look for?

There are other key factors. For companies that start out on a shoestring budget, the owner may take an informal, back-of-an-envelope approach to managing money and tracking payables and receivables. Banks are looking for detailed financial reports to gauge the health of the operation.

“One of the things that is very important for these businesses is that they continue to grow their financial reporting as their business grows,” says Rosenbrook.

Without reliable financial information, Rosenbrook notes, potential lenders will have less confidence in the company. “They don’t have good enough information to tell what might be a very good story. They need to make sure that that accounting and financial reporting keeps up with the growth of the company.”

Another issue that draws scrutiny: Is the company too dependent on a small group of customers or just a single product? That’s a concern because the business could change dramatically if, for example, a single large customer departs.

“What do you do when you lose 50 percent of your revenue?” says Rosenbrook. “You need some diversification in your revenue stream.”

Craig Veurink, small business banking manager in the Twin Cities for U.S. Bank, says that bankers are typically looking to see two years of financial statements from a business in its early stages.

Without two years of data, he notes, lenders will look to see if the business can qualify for a loan backed by the U.S. Small Business Administration.

“They usually like to see a company that has had two years of consistent cash flow in the company to show that they can sustain something,” says Veurink. “Once they get past that second year, banks will move them more into their traditional pool of lending.”

Even so, business owners need to be prepared to go under the microscope.

Veurink says that signing a personal guarantee is an automatic requirement for loans to a relatively new company. Prospective lenders will also look beyond the business and will likely want to see three years of personal tax returns from the owner.

“If you’ve got bad personal credit, that will kill the deal almost immediately,” says Veurink.

Another potential deal-killer? Not having a large enough cash cushion to tap if the enterprise hits a bump in the road.

“If there’s just no liquidity, the way the bank’s going to look at it [is]: ‘If one thing goes wrong, are we done?’ ” says Veurink. “That’s going to be very concerning at that point. I think it’s important for them to have some liquidity as they’re growing.”

Veurink adds that it can be a red flag when a company is in a business with very low barriers to entry, because there’s little to stop a host of competitors from launching similar ventures.

“The easier it is for them to start that company quickly, the harder it will be to borrow money to operate it,” says Veurink.

There are alternatives to bank financing, but Veurink says that some of those options may not be very appealing.

In some cases, other possibilities exist. Veurink says that some nonprofit consortiums may offer small loans—about $10,000 to $100,000—for small business owners. “We see them fill some gaps,” adds Veurink.

While the process of landing a loan may sound daunting to early-stage business owners, Veurink says that at this point, lenders are looking for good candidates for financing.

As a starting point, Wall says, a banker may look at the “Five Cs” to assess the creditworthiness of the business owner: character, capacity (to repay the loan), capital (invested by the business owner), collateral and conditions (of the overall business climate).

A personal guarantee for the loan is an important reflection of the entrepreneur’s own confidence in his or her business, Wall says. “The personal guarantee keeps them active in the process if there’s ever an unwinding of the debt,” says Wall.

“The biggest benchmark right away is being able to describe how you’re going to pay it back,” says Wall, which means taking a close look at cash flow. “If you can’t show that, it’s hard to get any bank interested.”

Wall notes that SBA loans can offer some flexibility for the bank and the borrower.

“Usually it will allow the bank to take more risk in one area than they would have without the SBA involved,” says Wall. “We can also fix rates longer using the SBA. Especially in such a low [interest] rate environment, that can be a big benefit.”

Although SBA loans come with a slightly higher interest rate, Wall says that in some cases the SBA option could ultimately be cheaper over the long haul. For example, in the case of a loan to buy real estate, he notes, the SBA may not require a business owner to put in as much equity upfront, which could free up money to invest elsewhere in the business.

Since about 2014, Wall says, small business lending has been solid.

Like most of his industry colleagues, he is not expecting to see any drastic hikes in interest rates for 2016; they remain near historic lows.

Rick Gobell, president and CEO of St. Paul-based Drake Bank, says it seems there were actually more startups during the recession. Many people who found themselves laid off from a corporate job decided to test the waters by starting new ventures to work for themselves.

“There were some executives or some people that were displaced during the [tough] financial times and were looking to do something different. You saw a lot of activity from that area,” says Gobell. Today, he says, “that pool of individuals is not out there. During the tougher times, they didn’t have any choice.”

While not everyone who starts a new business may have been an executive, Gobell says that it’s important for bankers to study the management team when weighing a potential loan.

“The management obviously is the major critical component—a lot of it falls back on the management and their background,” says Gobell. “Probably the lack of capital is the largest stumbling block for most companies starting out.”

In the first group, he sees owners who bring solid management and operational experience to the new concept. In the second group, he sees entrepreneurs with little to no business experience who are working to develop a new product but have not yet been able to demonstrate a demand for what they’re creating.

Williams says he’s more confident in the first category of businesses, which are anchored by principals who can bring experience to the table. He likes to see businesses that have solid research and realistic goals about future sales. In some cases, he says, companies may be working with a CPA or other advisor to help flesh out their story.

Williams notes that if a company is primarily doing research and development for a new product, the owners can quickly burn through a lot of cash.

“I think those owners of those businesses really try to sell you on the product. You have to be a little bit of a dreamer to take that risk. Invariably they overestimate the demand,” says Williams. “We are a banker, we’re not an investor. We have to evaluate at some point: ‘If this doesn’t work, how do we get paid?’ ”