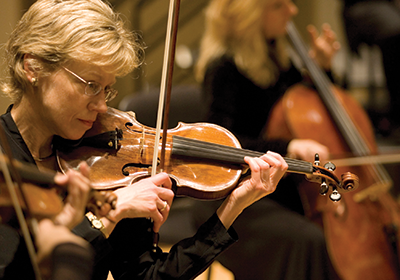 Can Arts Organizations Give Away Online Content And Still Thrive?

The Great Recession nailed most businesses, but arts organizations may have been hit the hardest. Their customers not only had fewer discretionary dollars, but the Internet age conditioned potential new enthusiasts to expect free digital content. So the question became: To stream or not to stream? Would the strategy grow the audience, or cannibalize the whole operation?

A 2013 report by Americans for the Arts indicates that the latter may be happening. The index for cultural organization health for 2011 was at its lowest point in 14 years, and the report lays some of the blame on mobile streaming. But around the Twin Cities it seems to be a different story.

The Minneapolis Institute of Arts (MIA) has been finding success with its year-old digital magazine Verso. It’s available for free as an iPad and iPhone app, and offers multimedia content on MIA exhibits. “It’s deepening our relationship with patrons, plus expanding our audience around the world. We have readers in Mongolia, Borneo, China. It’s cool,” says Diane Richard, who edits the content. Despite the free web content, paid membership grew 40 percent, back to 2008 levels. Verso today has more than 8,000 subscribers.

The St. Paul Chamber Orchestra (SPCO) also has a digital giveaway, its Listening Library, which it launched in 2011. It offers 250 full-length works, says Jessica Etten, SPCO’s senior director of development and external affairs, and is “the most expansive online listening library in the world . . . the Berlin Philharmonic has a digital concert hall, but that’s a paid service.” The site has had 250,000 unique visitors so far. Etten notes 2013 concerts (post-labor stoppage) exceeded attendance and revenue goals, and the annual fund contributions are running ahead of expectations.

At the Minnesota Opera, digital content is used as an education tool. “We post concerts as a way of showing what a performance is like, as we want new people to come,” says president Kevin Ramach. He says the organization is still lagging financially since the economic recovery, but subscriptions to its 2013-14 season reached a 14-year high, with 6,425 subscribers, the majority in full-season packages. “We plan to do more digitally going forward,” he says.