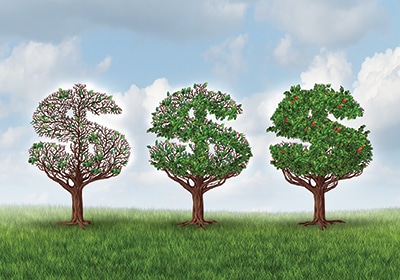 Tom Renier, a lifelong Duluthian, has led one of the most innovative foundations in Minnesota, a state that has drawn national attention for the size and creativity of its philanthropic community.

While many foundations target grant dollars to aid the poor and increase access to educational programs, Renier, through his leadership of the Duluth-based Northland Foundation, demonstrated that northeast Minnesota needed an organization that went beyond the traditional boundaries of grantmaking foundations.

Renier, who was named the first president of the Northland Foundation, has seen tremendous change in the northeast Minnesota economy from his vantage point with the foundation since 1986. As he neared retirement in December, he reflected on those economic shifts and the foundation’s growth from his office.

The mid-1980s were a tough time for rural economies in Minnesota. The farm crisis and a steep mining downturn had caused severe economic pain.

The McKnight Foundation, based in the Twin Cities, wanted to address problems in rural Minnesota. However, instead of starting a large program internally, it seeded funding for six regional philanthropic organizations throughout the state. These “initiative” foundations would provide grants to programs in their regions to help ameliorate the troubles rural Minnesotans were facing.

One of these was the Northeastern Minnesota Initiative Fund to serve the seven northeastern counties of the state. It would later be renamed the Northland Foundation.

Beyond awarding grants to nonprofits that could help meet human service needs of struggling residents, Renier and his board wanted to help northeast Minnesota become more economically secure. “Folks in northeastern Minnesota had always seen themselves as employees,” Renier recalls. Its employers—in mining and timber in particular—were headquartered outside the region.

“If we’re really going to have the kind of impact we want, we have to get engaged in some form of job creation, economic development and business diversification,” Renier says, encapsulating the thinking at the foundation’s birth. “So many of the region’s communities were company towns, and as the company went, so did the economy.”

Renier and his board wanted to make loans to small businesses in the region. At that time, he notes, “capital was at a premium in rural Minnesota.”

The McKnight Foundation, which provided substantial funding to launch the Minnesota Initiative Funds, worked with the regional organizations to gain Internal Revenue Service designations that allowed them to directly make loans to for-profit businesses. By taking this step, the regional foundations provided financing to support new or expanding businesses in rural Minnesota. Those local companies could then hire area residents who badly needed jobs.

One of Renier’s early challenges was raising capital. That meant partnering with regional banks, and it took a while to gain their trust. “But as time went on, we became very good partners with the local banks,” Renier says. Nearly all foundation loans are done in conjunction with at least one bank. Northland provides subordinated debt, thus taking a higher level of risk.

Renier acknowledges that not all of the loans worked out. “But if we’re following our overall mission as a philanthropic organization, then we need to take some risks,” he says. “Just like we need to take risks with our grants and take a chance on some smart people who are starting a new project or new organization, and give them the capacity to be successful.”

Northland Foundation by the Numbers

The Northland Foundation, headquartered in Duluth, serves the people of seven counties in northeastern Minnesota.

From its founding through mid-2014, the Northland Foundation has helped create or retain about 7,000 jobs by providing 550 loans to businesses. Northland’s loan dollars totaled $57.4 million.

When the foundation examines potential deals, Renier says that it looks at the number and quality of jobs that would be created. Over the years, the foundation has made loans to many different types of businesses, including technology firms, manufacturers and craft breweries.

One of Northland’s business-loan success stories is Frost River Trading Co., which manufactures canvas and leather bags, briefcases and luggage in Duluth. Owner Christian Benson, a Twin Cities transplant, bought the troubled business in 2008 after it had been inoperative for about a year. Northland, which was one of the creditors, offered to write down the debt the company owed. “I think they saw potential in me” to rebuild the business and add jobs, Benson says.

After just two years, Benson needed more space for his company. Northland offered to do a loan along with a bank of Benson’s choice. “This put me in a position to develop a solid banking relationship,” Benson says, even in the middle of the recession. Frost River, which sells worldwide, now owns a 26,000-square-foot building in West Duluth, which also includes a retail store.

The Northland Foundation also awards grants. Along with several other Minnesota-based foundations, it has collaborated on funding early-childhood programs for more than a decade. Renier is especially proud of Northland’s own Kids Plus programs, which connect children of all ages with caring adults in their communities to improve their educational and life outcomes.

Another beneficiary of Northland funding is One Roof Community Housing, a Duluth nonprofit that offers homeowner education, fix-up loans and other housing programs. “Tom has supported nonprofits to become more entrepreneurial in fulfilling their missions,” says One Roof executive director Jeff Corey.

For One Roof, being entrepreneurial means raising capital to build and improve low-income housing. “Our primary income comes from getting the projects done and selling them,” Corey says. Northland also has connected One Roof and other nonprofits with consultants who provide training in business skills, such as long-range strategic planning.

Kathy Gaalswyk, the founding president of the Little Falls-based Initiative Foundation, has worked with Renier for decades. Northland and the other initiative foundations, she says, have provided “a way for people to get involved in casting a vision about what can happen and move it to action to bring about that positive change.” Discouragement in the 1980s, Gaalswyk adds, has “shifted to hope.”

How has that hope manifested itself in northeastern Minnesota, nearly 30 years after the Northland Foundation was formed? “A lot of things have changed, and some things haven’t,” Renier says. “Mining and ancillary businesses continue to be a dominating part of the gross regional product.” At the same time, Duluth has been diversifying with tourism, health care, technology and aviation, and the city government is on firmer financial footing. New businesses are sprouting up throughout the region. “There is a much stronger entrepreneurial spirit in northeastern Minnesota,” Renier says. “There are more and more people who feel they can succeed in business here.”

Renier’s successor is former legislator Tony Sertich, who recently led the Iron Range Resources and Rehabilitation Board in the Dayton administration.

As for Renier, he plans to relax a bit, do some volunteer work and continue his service on various boards. He’s in a pivotal position as chair of the Minnesota State Colleges and Universities system board of trustees. He’s leaving the foundation he launched in solid shape—and the region he serves and loves far better than when he started.