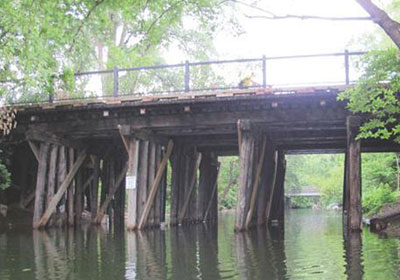 The bridge has drawn objections from the Minneapolis park board, which would prefer that a shallow tunnel be built for light rail trains to travel beneath the Kenilworth Channel.
December 05, 2014

Three designs for a new bridge over the Kenilworth Channel for the ongoing Southwest light rail expansion project were released by the project office Monday, carrying descriptions such as Arched Pier Concept, Thin Deck Concept and Steel Pier Concept.

Once built, the new bridge will replace a mid-century timber rail bridge that now carries a freight rail line as well as runners, walkers and cyclists on the popular Kenilworth Trail. Beneath is the channel that connects Cedar Lake and Lake of the Isles that is used by canoers, kayakers and — when it freezes over — cross-country skiers.

According to the alignment approved by the Met Council and consented to by the cities along the 16-mile expansion, the new bridge will also have two tracks for light rail trains. But the bridge itself has drawn objections from the Minneapolis Park and Recreation Board because board members and senior staff think it will disrupt the pastoral nature of the channel — not just from increased rail traffic but from the mass of the new bridges themselves. The board would prefer that a shallow tunnel be built for the light rail trains to travel beneath the channel.

Park board spokeswoman Dawn Summers said the staff and members had just received the designs and were not able yet to comment on them.

According to a press release from the Metropolitan Council’s Southwest Project Office, which accompanied the designs, the bridges are designed to be “reminiscent of the existing railroad bridge and are fashioned to fit in with the natural surroundings.”

Based on comments from organizations and agencies that are being consulted on the design, the three concepts try to “minimize the visual impact and hazards for channel users.” To that end, all three “would be supported from below only with just three rows of piers, down from the six on the existing wooden railroad bridge. Poles holding the overhead wires that carry electricity to power the trains would not be located on the bridge. In the current concepts, they would be set substantially back from the banks of the channel.”

The other design suggestions were to maximize the space between the two bridges and create more space in the channel by reducing the number of piers, to use natural materials and to use a “utilitarian” design.

Among those being consulted on the project are the Minnesota Department of Transportation, the State Historic Preservation Office, the Minneapolis Park and Recreation Board, the city of Minneapolis and the Kenwood Isles Area Association.
The cost of the new bridge is estimated at between $4 million and $7 million.

Arched Pier Concept: Concrete arched piers would support a concrete deck with steel railings, recalling the essence of the existing rail bridges of the Chain of Lakes area. View is looking west with the Burnham Road Bridge in the background.

Thin Deck Concept: canted (angled) concrete piers would support a thin deck of concrete with light steel railings. The thin deck lessens the visual impact of the bridge over the channel. The concept would use charcoal-tinted concrete to reinterpret the existing wooden railroad bridge.

Steel Pier Concept: canted (angled) steel pier made of natural steel would support a concrete deck with natural steel railings that will weather in a couple of years to a warm brown patina.