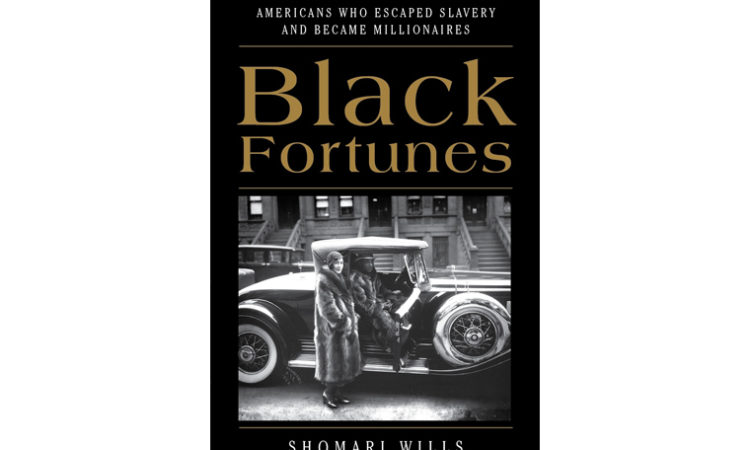 Author Shomari Wills offers interesting, thoughtful tales that show readers how past Black entrepreneurs - some of whom could barely read or write - changed U.S. economics and paved the way for later wealth-builders.
By Terri Schlichenmeyer
March 06, 2018


A dollar doesn’t buy as much as it used to.

Once upon a time, you could get a good steak and a drink for under ten bucks. You could buy a house for less than five figures, and it was big enough to raise a good-sized family in it. A dollar used to stretch farther, last longer, buy more, and in the new book “Black Fortunes” by Shomari Wills, it took fewer dollars to make someone rich.

Growing up, Shomari Wills heard many stories about his uncle, “the millionaire” son of a slave who became a rich man. Such a tale, says Wills, is an “overlooked subject” in American history.

Strictly speaking, he says, the first Black millionaire in America was William Alexander Leidesdorff, real-estate mogul, philanthropist, and friend to the powerful, who lived in San Francisco well before the Civil War.

But this book isn’t about Leidesdorff.

It’s about Mary Ellen Pleasant, who received an inheritance from her late first husband, and parlayed that “small fortune” into a much larger one that she used as an activist. It’s about O.W. Gurley who bought land in Oklahoma and built a predominantly Black town that was exceptionally prosperous – especially for Gurley.

It’s about Annie Turnbo Malone and her protÃ©gÃ©e, Sarah Breedlove. After Emancipation, Malone made it her mission to create hair and beauty products that worked specifically for Black women. Once her business was successful, she hired salesladies – one of which was Sarah Breedlove, who married C.J. Walker and created her own product to rival her mentor.

It’s about Robert Reed Church, former slave, favorite son of Memphis, and the richest Black man of his time. Even now, more than a century after his death, his legacy can still be seen in his adopted home town.

And it’s about Hannah Elias, who spent most of her life in scandal and built her wealth with the money of her lovers, then disappeared. To this day, says Wills, nobody knows where Elias landed – or how much of her ill-gotten fortune was intact.

“Black Fortunes” is a good idea in bad need of an editor.

Over and over, I found dates that didn’t match, incorrect information, statements that conflicted with other statements, silly repetitions, and a lot of “huh??” moments. After a while, these errors superseded any information I was gleaning.

Still, author Shomari Wills offers interesting, thoughtful tales that basically show readers how Black entrepreneurs – some of whom could barely read or write – changed U.S. economics and paved the way for later wealth-builders and, in some cases, for overall equality. Wills admits in his introduction that he brought these stories forth, even though “Few records exist” from his subjects’ times, and diaries and letters were largely non-existent.

That would explain the deep novelization of the tales, which is not the bigger distraction; lack of attention and a red pen are more the issue. Even so, with a dose of patience, this book is worth a look. Just be aware that “Black Fortunes” isn’t what you may be used to.