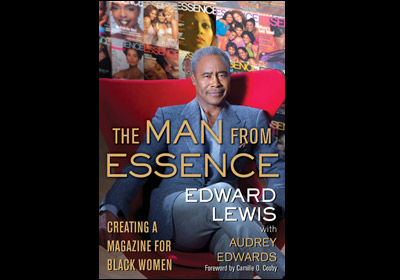 Book Review: “The Man from Essence: Creating a Magazine for Black Women”

“The Man from Essence: Creating a Magazine for Black Women”

It’s never been done before.

You’ve been around long enough to know, however, that the road to success can be paved with spikes and nothing ever happens smoothly. In “The Man from Essence” by Edward Lewis (with Audrey Edwards), you’ll see that that phenomenon crosses all industries.

By age 28, Edward Lewis had already endured his share of awkwardness: he’d lost a football scholarship at one college and had flunked out of law school at another. He was, however, able to find and keep a good job at a major bank in Manhattan, which led to an opportunity that would “transform” his life.

The vice president of a New York investment firm invited a ‘bunch of . . . young bloods” to a think-tank meeting, promising them financing if they came up with a business idea that would work. One of the attendees mentioned that his mother always dreamed of a magazine specifically for “Negro” women and, offhandedly, the investment VP paired him and two others with Lewis, who knew “something about finance.”

Eager to own their own business, the four men—Clarence Smith, Jonathan Blount, Cecil Hollingsworth, and Lewis—set up a partnership in March, 1969, and began looking for an editor for their new magazine, even though they “knew a little more than zip about Negro women and the consumer market . . . they comprised.”

There was, of course, a learning curve—including a disastrous almost-name of the magazine, staffing problems and many wars of words—but in the spring of 1970, Essence magazine debuted. Despite an initial problem with funding, a revolving editorial door, plenty of in-fighting, lawsuits, ousting of partners, and “out-of-control behavior,” the magazine thrives with a readership that today “remains ever faithful.” And of the original four partners, Lewis was the “last man standing” when Essence Communications Inc. was sold to Time Warner in 2008.

This story of a magazine as told by “The Man from Essence” is a good one. It’s filled with advice, insight, and hot-button gossip, but that’s not all. It also includes stories about people who probably won’t like those stories told.

Indeed, author Edward Lewis (with Audrey Edwards) leaves nothing unsaid in this business memoir and I found that completely irresistible. Here, readers learn a bit of background on what it takes to launch a successful magazine—what to do and definitely what not to do—and we get a behind-the-scenes taste of a business like this. Along the way, Lewis gives us a sense of the times and attitudes in which this iconic magazine was launched and incubated, which is both entertaining and informative.

That makes this book a nice surprise, and not just for fans of the magazine. If you’re up for an advice-dispensing business biography that also dishes dirt, in fact, “The Man from Essence” is a book to try.

Terri Schlichenmeyer, “The Bookworm,” never goes anywhere without a book. She lives on a hill in Wisconsin with two dogs and 13,000 books.