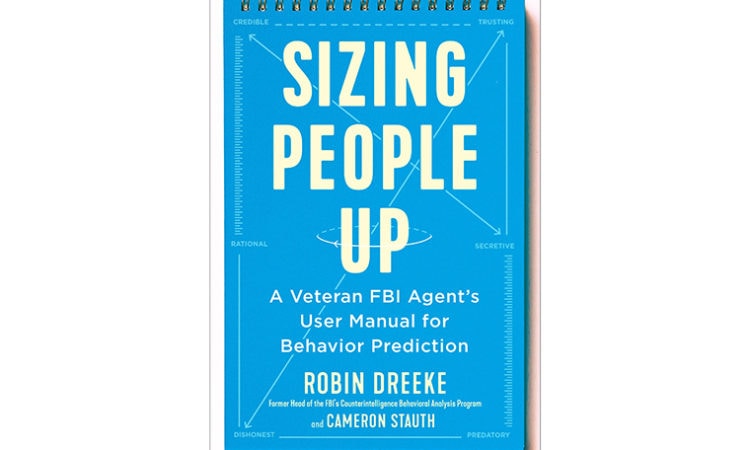 It could go either way.

Your client could say “yes” to the campaign you’ve developed and if he does, well, your year is set practically as soon as it’s begun. Or, he could wrinkle his nose and send you back to the drawing board with your head hung. It’s 50/50, a horse apiece, it could go either way and, as in the new book “Sizing People Up” by Robin Dreeke and Cameron Stauth, you wish you had a crystal ball…

Come to think, there are a lot of things you wish you knew about work: like, who can you trust and how do you know your boss is happy with your efforts? As author Dreeke indicates, it’s common to wonder but the best way to know is to understand how to “read” people. He learned to do that following September 11, 2001, when he realized how helpful it would’ve been to pre-identify those he could rely on in a crisis.

It didn’t matter whether they could help or didn’t, he says, and “there was no right or wrong – just reality.” Still, he points out that there are times when knowing how people might act is beneficial in life and in business.

There are, Dreeke says, six things to heed when trying to determine someone’s future behavior: vesting, or linking “mutual success”; longevity, or “believing your bond will last”; reliability;

being consistent in positive actions; communicating in “masterful” language; and having enough stability in your relationship to overcome conflict.

To show his methods in action, Dreeke writes of the last years of his career with the FBI. He used his methods when setting up a network of Russian contacts through “a secret informant.” He used them to tweak his career, and when he was given a tip about a spat between two countries who both had nuclear arms. His methods helped when he had a bad supervisor and in gathering good co-workers.

The bottom line: “… at one time or another, we’ve all been cheated and lied to,” says Dreeke. Isn’t it better to know who you can trust?

There’s really only one answer to that, isn’t there? Problem is, there’s way more than one way to get there in “Sizing People Up.”

It starts once you get past the introduction: authors Robin Dreeke and Cameron Stauth add increasingly more layers to the methods through new or enhanced bullet points that are found every few pages, and some of which are really pretty detailed. Those finer points are good, but the overall becomes burdensome about halfway through this book; the authors say that their methods of behavior prediction can be learned in a matter of days, but it may take that long to merely absorb all that they entail.

That doesn’t mean that this is a bad book; quite the contrary, the illustrative anecdotes buried inside the instructions are exciting and insightful, and will attract thriller fans. For workloaded business readers, though – presumably, the intended audience of “Sizing People Up” – the appeal could go either way.