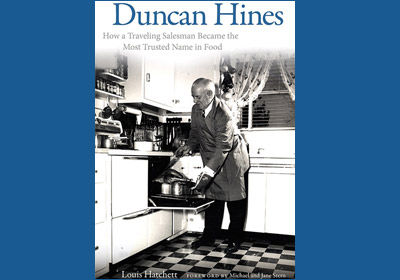 Book Review: “Duncan Hines: How a Traveling Salesman Became the Most Trusted Name in Food”

“Duncan Hines: How a Traveling Salesman Became the Most Trusted Name in Food”

by Louis Hatchett, foreword by Michael and Jane Stern

Tonight’s dessert is courtesy of your childhood.

The cake you’ll have after dinner is just like the one Mom used to make. It’ll be round, mostly, maybe a little lopsided, with a divot in the center from letting the oven door slam. Like Mom’s cake, your icing will be thick on top, thin on the sides. And like hers, yours came from a box, too.

Cake mix. What a concept. So how did something so revolutionary (in the 1930s) end up in nearly every kitchen in the country? Read “Duncan Hines” by Louis Hatchett and find out.

Born in Bowling Green, Kentucky, at a time when automobiles were new, Duncan Hines was the eighth of 10 children, but the last to live. He seemed to have an idyllic childhood but when his mother died in 1884, young Hines was sent to live with his grandparents. It was a decision that changed his life.

Because his grandmother was an excellent cook, eating became Hines’ “great passion.” He developed a keen palate for fine foods so, as later health issues took him to the newly-settled West; marriage brought him to New York; and a sales gig led him to Chicago, he seized every opportunity to sample various cuisines. Furthermore, Hines and his wife made it a “hobby” to dine out on weekends and he kept meticulous notes on restaurants, sanitation, and food.

By late 1935, after trading his information with other traveling salesmen, Hines’ notes grew to include 167 restaurants in 30 states. He saw that automobile travel was quickly becoming popular and he knew that everybody wanted know where to get a decent meal away so, that year, he and his wife added a self-published booklet to Christmas cards and “mailed them to everyone they could think of…”

Beginning with that giveaway, and until a few years after his death in 1959, Duncan Hines enjoyed fortune and popularity as America’s foremost restaurant critic. His was not the first such ratings book, but it was arguably the world’s most trusted.

So why is the name Duncan Hines synonymous with cake mix today, and not with the travel-restaurant guides that Hines first created?

Apparently, says author Louis Hatchett, everybody did, including thousands from around the world. In fact, he believes, it’s a pretty safe bet that if you were born before 1955, you knew where to look before you dined.

In “Duncan Hines,” Hatchett describes his subject as a mercurial man who fiercely protected his reputation but still managed to make money, despite the Depression and World Wars. The story of this rags-to-riches salesman is surprising and surprisingly fascinating—perhaps because Hines is not Hatchett’s only subject. We also get a sense of time and place, and I liked that.

This book is perfect if you’d like an unusual (and lively) biography to enjoy while dining, vacationing, or any time. With “Duncan Hines,” you can have your cake and read it, too.

Terri Schlichenmeyer, “The Bookworm,” never goes anywhere without a book. She lives on a hill in Wisconsin with two dogs and 13,000 books.