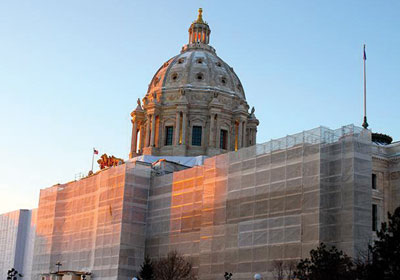 Bonding Will Be A Top Issue For The 2016 Legislature, So How Does It Work?

Gov. Mark Dayton made history last week when he proposed a $1.4 billion bonding bill for clean water, college campuses and other public construction projects across the state.

It’s the largest single bonding bill ever proposed in Minnesota, setting the bar high for the biennial debate about how much money lawmakers should borrow in order to tackle a backlog of infrastructure needs across the state.

Bonding bills — the process the state uses to pay for capital projects — are among the most complicated debates in state politics, requiring a high bar for passage and a lot of competing interests across the state. Lawmakers must comb through thousands of projects and present a delicate regional and political balance in order to get support. Sometimes, a single project can tip the scales and mean the difference between failure and passage.

Here’s a breakdown of how the bonding process works in Minnesota and how legislators manage to pass a bill nearly every year:

What do we mean by “bonding bill,” and how long has it been around?
In 1962, Minnesota’s constitution was amended to allow the state to take on debt, issuing bonds to help pay for the construction and upkeep of its many public buildings and other infrastructure. Nearly every year since then, legislators have reviewed and curated a package of projects they want to fund. That bill is known as the bonding bill or capital investment bill.

How do the bonds work?
At the most basic level, bonds are a form of debt that’s very similar to a loan. Government agencies borrow money by selling bonds to investors. In return, investors get a regular stream of interest payments from the state and the promise of a full refund at the end of the bond’s life. The maximum term of Minnesota bonds is 20 years, according to the constitution, but many don’t last that long. There are several different types of bonds, but Minnesota issues general obligation bonds for infrastructure, which guarantees repayment to investors.

What kinds of projects are eligible to be included in a bonding bill?
The state Constitution requires that a bondable project must be publicly owned and specifically designated for infrastructure, not ongoing or operational costs. Typically, bonding bills are filled with renovation or construction needs for public college and university campuses, safety upgrades to hospitals or prisons, sewer or other water infrastructure fixes, road and bridge repairs, transit, parks, trails, airports or public buildings like civic centers. A few other uses for bonding were etched into the constitution in the state’s early days — like repelling invasions and suppressing insurrections — but they don’t come up much anymore.

How does the bonding process start?
The state agency Minnesota Management and Budget (MMB) kicks off the official bonding bill process by asking local governments and agencies to submit requests for projects. For the 2016 bonding year, MMB got more than $3.2 billion in requests, $2.5 billion of that total coming from state agencies and $767 million from local governments.

That’s a lot of money. How much can the state afford to bond?
According to debt guidelines set out by MMB, the value of outstanding state general obligation bonds cannot exceed 3.25 percent of the total state personal income — the total income of all Minnesotans from all sources. As of November, this number was forecast to be about $284 billion in 2016. Within those guidelines, budget officials said the state could afford to issue about $1 billion worth of additional bonds as of the November budget forecast. However, when a bonding bill is authorized, it’s unlikely that all of the bonds would be sold immediately or even in the first year, meaning lawmakers could create a bonding bill bigger than $1 billion if they wanted. Guidelines aside, there’s no actual limit in the constitution as to how much debt the state can take on. That means the total size of the bonding bill is regularly up for debate.

How political is the process?
Democrats tend to argue it’s wise to bond more when the economy is down and interest rates are low in order to create construction jobs and — ideally — give the economy a boost. That’s why many Democrats call the bonding bill the “jobs bill.” Republicans look at bonding as another spending bill and want to take on less debt. Democrats and Republicans are also split on what kind of projects they favor. Republicans tend to push heavily for road and bridge repair projects, while Democrats often borrow for park and trail maintenance, transit and asset preservation on college campuses. Bonding debates don’t always don’t fall along party lines, though. Sometimes the divide is more regional than ideological, which is why legislators work hard to balance the number of projects in the metro area versus those in Greater Minnesota.

At what point do lawmakers get involved?
The requests that come in for bonding are usually far greater than the state can afford, so it’s up to lawmakers to cut the list down. The governor gets the first crack at prioritizing projects, however, introducing his proposal in January of even-numbered years. That sets the tone for the debate, but legislators have a big say in what’s included as well.

For bonding bills, the state constitution requires a three-fifths majority vote in each chamber of the Legislature to pass. That means 81 votes in the House and 41 votes in the Senate. As a result, legislators tend to take their time crafting the bonding bill. Members of the capital investment committees tour projects across the state and take public testimony. Eventually, each chamber creates a proposal and takes a vote on the floor. Those bills are sent to conference committees to create the final legislative bonding bill. After another floor vote, the bill is sent off to the governor, who has the power to sign the entire bill, veto the entire bill or line-item veto individual projects.

What’s the biggest bonding bill in state history?
In 1998, Republican Gov. Arne Carlson and the Legislature passed the first $1 billion bonding bill, which would be worth closer to $1.5 billion today with inflation. Since then, bonding bills have tended to clock in at about $1 billion over the biennium. It’s a self-imposed cap that serves as a middle ground between Democrats desire to bond and Republican calls for restraint, but many lawmakers say that figure doesn’t buy as much as it used to.

Why do lawmakers do bonding bills in even-numbered years?
Not long after Minnesota switched to annual sessions of the Legislature in the 1970s, legislators started informally calling even-numbered years the bonding sessions and odd-numbered years the budget session. But that rule is regularly broken: Legislators have passed some kind of a bonding bill nearly every year since the 1980s.Why? Bonding bills are a way to get a quick influx of money in the case of an emergency, like a natural disaster, and they can help break political gridlock in tough budgeting years. In 2011, Dayton called for a $500 million bonding bill as part of the deal to end a 21-day government shutdown over the budget. It also doesn’t hurt that big bonding bills are passed in election years, when legislators can tout individual projects back in their districts.

Do states have to use bonds to pay for infrastructure projects?
No. In good economic times, lawmakers like to use surplus cash to pay for infrastructure projects. The 1998 Legislature converted the $1 billion bonding proposal into half-cash, half-bonds. In 2014, legislators passed an $846 million borrowing package for construction projects and spent an additional $200 million cash on infrastructure. Many lawmakers prefer using surplus money for one-time projects like bonding instead of committing it to ongoing spending or tax relief. In 2016, legislators will have a projected $1.2 billion surplus to work with.
Does bonding affect the state’s credit rating?

Do other states fund capital projects the same way as Minnesota?
All states pay for infrastructure differently, depending on what’s defined in their constitution. The state of Washington, for instance, has the level of debt the state can take on written into its constitution, and the state of California can bond for operating costs.

What projects are in Dayton's 2016 bonding bill?
Dayton’s $1.4 billion bonding proposal would fund 212 individual projects, everything from a $70 million upgrade to the state Security Hospital in St. Peter to $100,000 for a DNR fish hatchery near Brainerd.

You can explore all the projects Dayton proposed at the bottom of the page here.