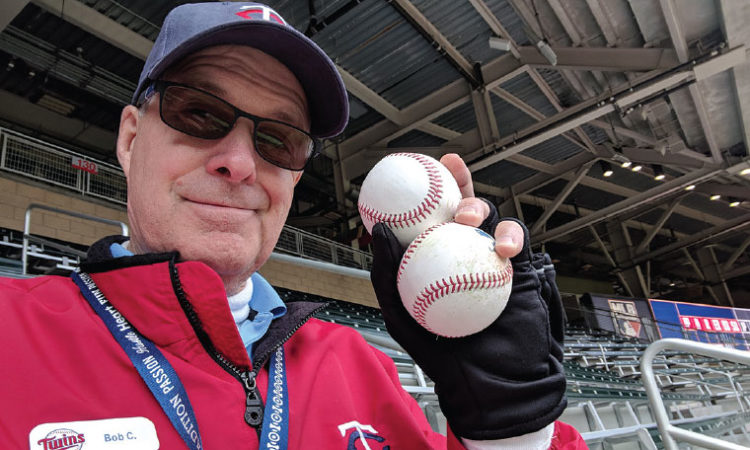 Bob Collins and the Art of the Side Hustle

The MPR veteran will join nearly a third of all “retirees” in the labor force.
By Liz Fedor
February 04, 2019

Bob Collins got hooked on the news as a boy, religiously watching Walter Cronkite’s broadcasts on the Vietnam War. The news business, specifically radio, has been his calling since he got his first full-time job in 1977 in Southbridge, Mass.

So why is Collins, an MPR News stalwart since 1992, working as a Lyft driver and an usher at Target Field?

“I have trouble sitting still,” Collins confesses to TCB in an interview at an MPR studio in downtown St. Paul. Collins works full-time at MPR and writes the News Cut blog. But he estimates that he also drives 22 to 23 hours a week for Lyft. There are days, he says, when his wife, Carolie, will call him and ask, “Are you ever coming home?”

The couple, who live in Woodbury, have been married for 36 years and raised two sons. This is not the first time Collins has worked peculiar hours. For 10 years, he got up early seven days a week to deliver the Pioneer Press from 3 to 5:30 a.m. He used the money to build an airplane that he piloted.

But now Collins has a different reason for working side jobs. He’s been afflicted with Meniere’s disease, which has caused severe hearing loss.

Although he wears hearing aids, he can no longer go to news meetings because the sounds are amplified and he can’t easily understand what any single person is saying. “It’s incredibly isolating,” he says.

One of the worst aspects of Meniere’s involves episodes of intense vertigo. The effect of Meniere’s is prompting Collins to end his MPR career on May 31 at age 65. But don’t expect Collins to be idle. The Census Bureau reports that 28.3 percent of Minnesotans age 65 to 74 are still part of the labor force. Collins will be among them.

He needs and wants social interaction, so he’ll keep driving his 2015 Subaru Legacy for Lyft. He’s looking forward to his second season as a Twins usher, and he recently alluded on Twitter to a third side hustle in the works at a local airport. Retirement is busy.