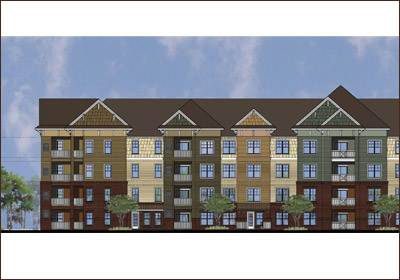 A Florida developer recently broke ground on the project, which is called Skye at Arbor Lakes and represents one of the largest suburban apartment projects under development in the Twin Cities.
By Burl Gilyard
August 23, 2013

A Florida-based developer has broken ground on the first phase of Skye at Arbor Lakes, a large luxury apartment project in Maple Grove.

In the current apartment development boom, many developers have focused on sites in the downtown and Uptown areas of Minneapolis. Skye at Arbor Lakes currently ranks as one the largest suburban apartment projects in the Twin Cities rental project pipeline.

“A combination of events drew us to Maple Grove. First and foremost was the dynamics of Arbor Lakes and the significant amount of commercial activity in Arbor Lakes and the lack of a new luxury residential units to complement that commercial space,” Tom Hayden, director of development for LeCesse Development, told Twin Cities Business.

Hayden noted that Minneapolis-based Target Corporation is growing in the northern suburbs with the expansion of its campus in Brooklyn Park, another signal to him that the market needs more upscale rental units.

“They are on our radar, no question,” Hayden said of Target.

According to Hayden, rents for the market-rate units will range from $1,050 to $2,100 per month. The site is located at the intersection of Lakeview Drive North and 80th Avenue North in Maple Grove near the Arbor Lakes retail corridor. Plans also call for 10 percent of the apartments to offer “affordable rents,” Hayden said.

The Skye project first won conceptual approval from the Maple Grove Planning Commission in April 2011, when the proposal was known as GrandeVille at Arbor Lakes. Hayden said that it took some time to put project financing in place. He declined to comment on the project budget.

The two-phase plan in Maple Grove has city approval for a total of 466 units. But at this point, Hayden noted, the timing for the second phase is not clear.

Amenities at Skye at Arbor Lakes will include an outdoor pool, a fitness center, a dog park, and a business center.

LeCesse’s previous developments in Minnesota include CityWalk in Woodbury, a project with more than 500 units, including both apartments and condominiums.