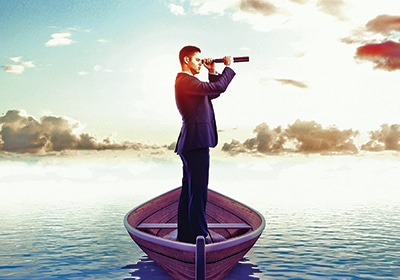 Banking On The Future

The economy may not be roaring back, but it’s improving. So how should your business plan its financial moves?
By Gene Rebeck
September 05, 2015

So how is the Minnesota economy really doing? And what should you, as the owner or manager of a small to midsize business, be doing in the current economic climate?

The gross domestic product grew at a rate of 2.3 percent in the United States in the second quarter, according to the Commerce Department. Businesses who responded to the recent TCB quarterly economic indicator study are anticipating modest growth. In the August issue, TCB reported respondents were taking a “steady as she goes” approach to hiring and production levels.

Still, some small and midsize businesses can be excused for thinking not everything’s coming up roses. The agriculture sector, for instance, is experiencing the downside of a crop glut. That’s having an impact on the many Minnesota manufacturers who supply equipment to farmers. On the Iron Range, the global overproduction of iron ore and steel has meant hundreds of layoffs for mining companies, and stresses for firms that supply the mining industry. A strong dollar is making things tough for businesses that sell (or are seeking to sell) outside the United States. And companies that are expanding are often finding it hard to find good hires; meeting workforce needs has been especially challenging for rural manufacturers.

In short, it’s hard to generalize about the savviest business strategies, particularly in a state with a diverse economy. Based on this complicated economic scenario, what should business banking customers consider when they are looking at late 2015 and early 2016 financial transactions? How does the current economy affect business loans, acquisitions and other major financial moves? Here’s what Minnesota bankers—and their small and midsize business customers—are saying.

How the winds are blowing

Though they acknowledge economic headwinds, many Minnesota bankers express optimism about the economy. “Clients have adopted a lean culture,” says Phil Trier, Twin Cities market president for U.S. Bank. “So with revenues really starting to come back, we’ve seen robust activity at the bottom line with profits. They’re comfortable making more capital investments, which makes us notably optimistic. I think everyone feels pretty good about 2015 and going into 2016.”

Laura Oberst, executive vice president and central region group head for commercial banking at Wells Fargo, says that in the past few years, “the lack of confidence slowed down the pace of recovery—that and the apprehensiveness of companies to expand.” She sees more demand this year, though she also notes that “we have had, through this recession, double-digit lending growth in Minnesota and throughout the Midwest.”

Like many bankers, Todd Williams, senior vice president and chief credit officer at Edina-based Fidelity Bank Minnesota, says that the commercial construction sector is particularly strong, as pent-up housing demand and some major projects are keeping his bank’s loan officers busy. (Fidelity Bank’s primary clientele is privately held businesses with annual revenue under $100 million.) The slowdown he sees is in commodities. “That’s affecting some of our wholesalers,” Williams says, as well as manufacturers of ag equipment and suppliers to the mining industry.

Because of factors such as these, not all Minnesota bankers are reporting a general economic buoyancy. Angela O’Neill, Associated Bank’s commercial banking market leader for Minnesota, says that among the business customers her bank works with, “it’s a little sluggish.” (Associated Bank’s largest Minnesota presence is in the metro area, though it also operates elsewhere in the state. O’Neill’s group works with businesses with annual revenue of between $5 million and $100 million.) There are “pockets of industries that are doing well,” O’Neill says, but industries such as agriculture are slower. “Our manufacturing customers are doing OK,” she notes, and trucking companies and construction tend to be doing well. But she adds the post-recession period has been “a mixed bag.”

Here’s one way to summarize Minnesota’s complicated economy: While on the whole state business is generally strong, it’s not as strong as it was just before the recession hit, and some sectors are doing better than others. Todd Senger, Minnesota market president for BMO Harris Bank, says that when bankers compare [business] today to five years ago, “people would welcome more volume, [yet]I do believe that people are upbeat, in terms of what they’re seeing within their base of business.”

So whether you’re buoyant or cautious, there are a number of ways businesses can prepare for what’s ahead.

With the combination of optimism and uncertainty that Minnesota businesses of all sizes are facing, bankers say that companies should be in touch with their lenders and advisors to lay out plans for the future. If anything, Associated Banks’ O’Neill says, you should “over-communicate” with financial guides, discussing capital expenditures, potential expansion and succession planning, particularly with the potential rise in interest rates.

And bankers say that their banks want to lend. In the aftermath of the Great Recession, they’re competing for good loan opportunities. “Banks are healthier today,” Oberst says. “There are more banks with more money out there.” Plus, it’s a good time to take out a loan—as long as a company has a good reason to borrow.

“Our world is not free of all trouble, as we [can] see in Greece or in the Middle East,” Reiling observes. And not everything in the United States is running perfectly smoothly. “But from a Minnesota standpoint, things seem to be moving right along,” he adds.

Of course, the economy remains uncertain. Carefully managing debt, borrowing to capture new market opportunities, and planning for the future remain good strategies. But as Fidelity Bank’s Williams advises, with an eye to Minnesota’s winter, “Don’t get ahead of your skis.”