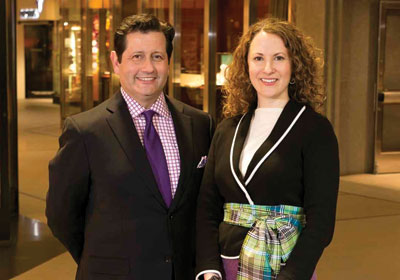 At Galleria, a Changing of the Gilt

There are new owners, leadership, and an enhanced luxury emphasis at Galleria.
April 29, 2013

But Hines, a Houston-based international property management firm with more than 5 million square feet of space in the Twin Cities, scored points with Galleria’s watchful independent storeowners and loyal shoppers by bringing in a familiar face to run the toniest shopping center in town. Galleria’s new vice president of retail is Luis Serrat, who ran Neiman Marcus in downtown Minneapolis for six years until the store closed in January. Serrat knows all too well the Twin Cities’ tortured relationship with high-end retail.

“This is a very nuanced market. You have to understand its pace,” Serrat says. “Twin Cities consumers are very informed, very deliberate in their shopping decisions.” But his new bosses in Texas, pleased to have a Galleria back in their portfolio (Hines used to own the much larger mid-market Gallerias in Houston and Dallas), see luxury brand opportunities.

“When you have a Tiffany & Company and a Louis Vuitton, there are other tenants that make sense with that,” says Hines Senior Vice President of Corporate Communications George Lancaster. Hines is interested in big names and market exclusivity for Galleria. Lancaster doesn’t believe the Neiman Marcus exit scares off national luxury retailers; rather, it offers new opportunity. Serrat echoes that sentiment, with qualifiers. “People here want luxury, they want heritage, but they don’t want to be held hostage to anything too splashy.”

Serrat sees openings in tailored menswear and in gifts and accessories. There’s talk of upgrades to the center itself, particularly its modest entrances. And Galleria plans to rebrand itself by fall. The folksy dog mascot and “shops of distinction” tagline are under review as it focuses its appeal to a regional audience of both upscale and aspirational shoppers. “Galleria is a super-strong brand,” Lancaster says. “We just want to tweak and modernize it.”