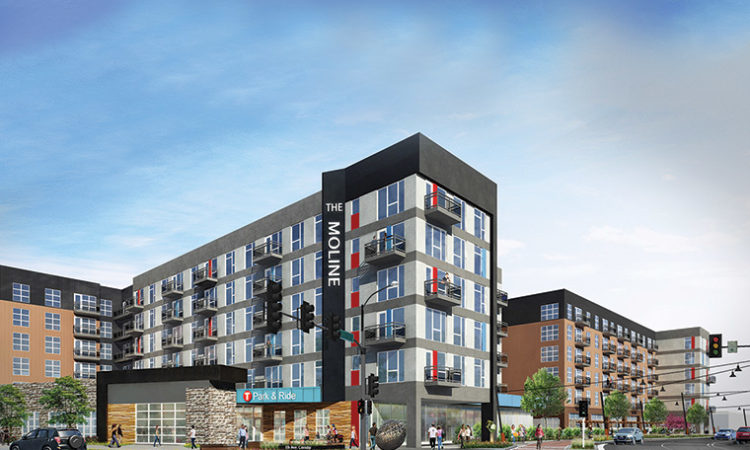 How do they come up with building names, anyway?
By Burl Gilyard
December 01, 2017

Before the many local apartment buildings under construction open their doors, a name goes up. The tradition is as old as the city itself, given the monikers carved into the lintels of century-old buildings. How do developers choose names that will stand the test of time?

Greco wanted to convey that their project will be different, but how does “Loden SV” accomplish that? Eric Luoma, co-founder of Fellow, says that “SV” stands for Shoreview; “loden” is a dark green. The name is meant to the refer to the greenspace that will be on the site.

Luoma says the average person doesn’t have to know exactly what the name means. “To me it sounds almost like it’s somebody’s name,” says Luoma. “It will become familiar to people.”

Fellow also came up with the name for the Hewing Hotel in the North Loop. Luoma notes that the vintage building has lots of timber; “hewing” refers to the process of refining a log into lumber. “The name’s got to do a lot of work,” says Luoma. “You’ve got logos, you’ve got signage . . . URLs are important.”

Dallas-based Trammell Crow Co. developed a Golden Valley apartment building called Arcata, next to the Colonnade office building. Mary Lucas, a Trammell Crow associate, notes that “colonnade” is a design term referring to a sequence of columns; “Arcata,” Italian for “arch,” evolved from “arcade,” a related term for a row of arches.

In a crowded field, Lucas says it’s important “to be able to differentiate yourself and be able to create a brand.”

Bloomington-based Doran Cos. just completed the Moline, a 239-unit apartment project in Hopkins. Millennials are likely unaware that the name is drawn from the former headquarters of the Minneapolis-Moline Co. across the street, which made tractors into the 1970s.

“I now own seven Minneapolis-Moline tractors dating from 1936 to 1959 . . . we had to expand the building to accommodate them,” says Kelly Doran, founder and owner of Doran Cos. The “tractor gallery” in the building’s lobby will be open to the public.

Doran says that he taps his own staff to come up with project names and never hires an outside marketing company. “It’s no different in some ways than trying to name children.”