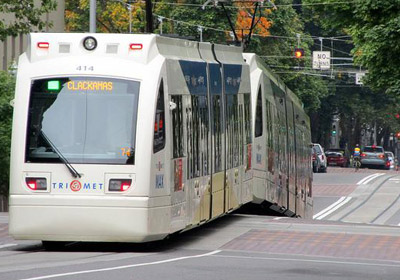 Portland’s public policies of the past have created a more connected and transit-possible city than Minneapolis.
By Amber Collett
November 01, 2012

As a carless transplant now living in Portland, Oregon, I’ve spent a lot of time observing the city from a bus seat. This prompted me to ponder the differences between transit systems in Minneapolis and my new town.

I hate to say it, but for its size, the Portland metro has a leg up when it comes to transit and cycling, especially in the level of integration between the two.

Planners there (or from my perspective, here) made an early investment in a robust metrowide transit system that entices car owners to opt for buses, light-rail and foot-powered options. Close to 84 percent of Portland TriMet riders have a car but rarely use it, or choose not to own a car at all.

In essence, Portland’s public policies of the past have created a more connected and transit-possible city. Its longstanding urban growth boundary, instated in the 1970s, kept the city center dense and prevented the development of ring after ring of suburbs like the ones found around Minneapolis and St. Paul. By keeping the city dense, Portland's planners ensured that their transit system would have the riders needed to make it a success.

On top of that, TriMet has the benefit of long-term community buy-in. Portland’s first light-rail line began operation in 1986 — compared to Minneapolis’s first light rail line, which didn’t roll down the track until 2004. It all worked to create a long-term transit culture that Minneapolis is only just beginning to tap into.

In Portland, a whole generation of people think of TriMet and the Metropolitan Area Express (MAX) light rail as inseparable from the city’s identity.

Minneapolis, on the other hand, has a relatively young transit system. Though having a young system does have its benefits—clean, modern buses, excellent maintenance and a system that almost always runs on time. It also means that transit funding and planning has taken a back seat to multiple-lane interstates and thoroughfares for decades. There is less flexibility for a transit rider in Minneapolis simply because there are fewer high frequency lines, fewer light-rail lines, and no streetcars. The regional balance of Portland’s transit system is something for Minneapolis to envy.

But, honestly, as a transit advocate, the biggest difference I’ve noticed between Minneapolis and Portland has nothing to do with the transit infrastructure. In the Twin Cities, there is a noticeable effort to make improvements. From a big picture perspective, the Twin Cities is an exciting place to be — advocates are still working to create a bigger and better system that serves the needs of commuters, transit dependent neighborhoods, and an aging urban population.

In Portland, They Seem Resigned to Current System

In Portland, it almost feels like they’re resigned to the system they have—almost as if there is nothing left to advocate for, despite the system facing budget shortfalls and maintenance issues.

To confirm my impression, I talked with Josh Collins, a friend and transportation professional that has worked in the transit sector of both cities. When I asked Josh what prompted his move from Portland back to Minneapolis, he said, “Portland feels like it is already there—and they are pretty laid back and causal. There is a joke that goes, ‘When you flip the lights on in Portland, they’ll turn on a little bit more slowly than anywhere else—and maybe only half will come on, but everyone will say ‘it’s OK’. There is a passive acceptance of ‘we’re already there’ and we don’t need to push because we’re already Portland. Whereas the Twin Cities still has that push for something better—they’re recreating themselves.”

All in all, both cities have transit systems that inspire admiration—if for slightly different reasons. Looking ahead, Minneapolis has the challenge of intentionally building out a regional transit system that serves the needs of an aging population, commuters, and transit dependent neighborhoods. On the other end of the spectrum, Portland has the challenge of maintaining and servicing a system that has already been built out.

In both cities, ongoing funding and community support will be essential in designing and sustaining a transit system that supports a livable community for generations to come.

See you on the road!

Amber Collett is a bicycling and urban advocate who lives in Portland, Ore. She works for Minneapolis-based Fourth Sector Consulting and tweets @AmberCollett. This article originally appeared as a guest commentary on the Minnesota 2020 website.