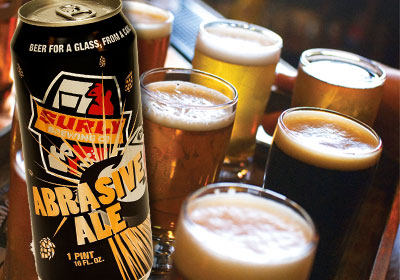 Midwestern canned beer, let’s face it, has had a bit of a bad reputation. According to local beer historian Doug Hoverson, author of Land of Amber Waters: the History of Brewing in Minnesota, in 1955 the president of Minneapolis Brewing bragged to a newspaper reporter that Grain Belt was successful because it was blander than the competition.

Surly Brewing Company in Brooklyn Center chips away at the bland-and-watery stereotype with the release this spring of its new Abrasive Ale. A double India pale ale (IPA) in a 16-ounce can, Abrasive Ale packs a punch. The brew crams in about twice the hops—a flowering vine crop and the ingredient most responsible for a beer’s bitterness— of a standard IPA recipe.

The new release from Surly is likely the most bitter commercial beer ever brewed in Minnesota. But it’s among a growing list of local and national craft beers with hop intensities that would have seemed unpalatable and unmarketable just a generation ago.

On the International Bitterness Unit (IBU) scale, an approximate measure of how bitter a beer will taste, Grain Belt’s competitors all those decades ago probably rated around 20 IBUs, while Grain Belt’s bitterness scored under 10. Today, Grain Belt still goes down easy. Like other lagers, including America’s best-selling beers, Grain Belt Premium barely registers on the bitterness scale at 6 IBUs, and that’s probably still a reason for its popularity.

But in the past several years, Minnesota brewers have tapped beers with IBU counts in the 60s, 80s, and even 90s. Surly’s Abrasive Ale? Its score is a wince-inducing 120 IBUs.

“All of our beers are a bit hoppier than the norm,” says Surly owner Omar Ansari. One of the four-year-old company’s original brews, Surly Furious, is rated at 99 IBUs. It’s an Americanized take on an India pale ale, a style invented by the British in the 18th century. They used hops in large volumes to mask staleness and preserve beers that made the months-long journey by ship to India. Abrasive Ale takes the Surly Furious interpretation of an IPA to a new hoppy extreme.

“It’s perhaps the quintessential American characteristic,” Ansari says, “to take something and push it all the way to the edge.”

The bitter-beer trend began a couple of decades ago on the West Coast, where most domestic hops are grown. It caught on more recently in the Midwest, especially at brewpubs and microbreweries. Bitterness is increased by using hops with higher acid content, by using a higher volume of hops, and by steeping them for longer periods in the “wort,” the unfermented liquid from which beer is made.

Summit Brewing founder Mark Stutrud won’t raise a glass to the extreme hop trend, which he mostly dismisses as a gimmick that new breweries use to get attention. It’s easier to brew an extremely hoppy beer than it is to brew an extremely balanced beer, Stutrud says. “I have no balance in my personal life, so I definitely need it in my beer.”

Ironically, Summit’s Extra Pale Ale played a big role in priming Minnesotans’ taste for some of the super-bitter, hoppy beers that Stutrud now pans. Summit’s EPA, which debuted in 1986 at 45 IBUs “was the first beer from this market that had that distinctive citrus fruitiness that’s coming from the hops,” Hoverson says. “It was a very well made beer and because it was local, people were willing to give it a chance.”

The market for more bitter beers may be enthusiastic, but it’s still fairly limited. Craft beers accounted for less than 5 percent of U.S. beer sales in 2009, according to the Colorado-based Brewers Association. Bitter beers are a niche within that niche, but one that Hoverson expects will last, at least locally.

“One of the things Minnesota’s brewers do generally very nicely is create well-balanced hoppy beers,” he says. “That’s one of the things that has made Surly’s Furious more than just a passing fad. It’s a very hoppy beer, but it’s got a lot of flavorful malt underneath it as well. It is a beer that people love to come back to.”