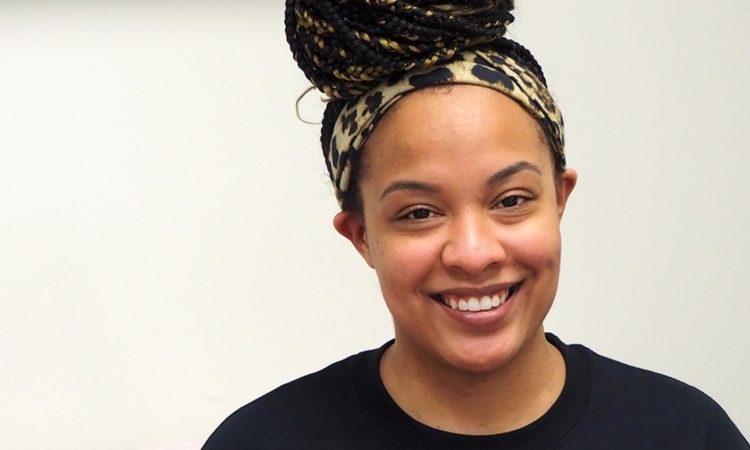 Marika Reese’s idea was that, rather than being licensed mental health professionals, most members of the Community Healing Team would be respected members of the African American community, including barbers, political activists, politicians and faith leaders. Andy Steiner, MinnPost

In 2017, Marika Reese decided to start her own for-profit mental health agency, Ubuntu Care Services, with a focus on African American clients. It was just the beginning.
By Andy Steiner
March 08, 2022

If you’ve been at a protest, a public meeting or a community event somewhere in the Twin Cities in the last year, you’ve probably seen them, in their bright yellow hooded sweatshirts: the Community Healing Team, a group of some 30 community leaders focused on the mental health of Minnesota’s African American community.

The brainchild of Marika Reese, a self-proclaimed, “serial social entrepreneur” and founder of the rehabilitative mental health care provider Ubuntu Care Services, along with her friend and colleague Leslie E. Redmond, the founder of Don’t Complain Activate, the Community Healing Team began around the first anniversary of George Floyd’s death.

Redmond, Reese recalled, “called me at midnight one night and said, ‘The community needs healing. This is in your lane. What can we do?’” Reese said she thought for a moment before responding, “‘We could make something called The Community Healing Team.’”

Reese’s idea was that, rather than being licensed mental health professionals, most members of the team would be respected members of the African American community, including barbers, political activists, politicians and faith leaders.

This mix was intentional, Reese said, so that people would feel comfortable in the presence of the Healing Team. “Why don’t most Black people go to mental health professionals when they have a problem?” she asked. “It’s because they’ve been excluded. Social work or psychology wasn’t created to help Black people. It was for other people. So we’ve found alternatives that we can utilize.”

Reese and Redmond pulled in two more leaders: Jaton White, director of community wellness for the Northside Achievement Zone; and Raj Sethuraju, associate professor of criminal justice at Metro State University. Together, they recruited members of the Community Healing Team.

At first, Reese said, she and the other organizers, “didn’t know what this group was exactly.” So they got together to brainstorm. They bought bright yellow sweatshirts. “We said, ‘We are going to do some good work in the community and support the mental health of community members.’ From there it just took off.”

Community Healing Team members supported protesters outside the courthouse during the Derek Chauvin trial; later, when protests and community meetings popped up after former Brooklyn Center police officer Kimberly Potter shot and killed Duante Wright, team members were back in full force. “There were community members at events who would speak out and then they might be triggered by their testimony,” Reese said. “We would talk to them, pull them to the side, help them learn coping skills that they could use.”

Since then, the group has been at many other major public events in their yellow hoodies, providing mental health support for attendees. In the beginning, Reese and her co-organizers thought maybe the group would attend a couple of events a month, but as more people saw them in action, the Community Healing Team began getting invited to more meetings and events.

She estimated that the Healing Team serves some 50-100 people at each gathering it attends and that each team member serves 75 people each month. “It seems like in the Black community, something very traumatic is happening every week. This group, this space, is needed. We hear that every day.”

Reese is ideally qualified to lead the team. A born-and-bred Minnesotan, she grew up in a family impacted by addiction and mental illness, and she knew she wanted to have a career focused on helping others.

After graduating from the University of Minnesota with a bachelors’ degree in sociology and African American and African studies, Reese, 30, took a job as a community health worker focused on mental health.

As she got to know her clients and their struggles, Reese said she began to feel frustrated by the limitations of the mental health system. “I didn’t like the way things were going,” she said. “I loved what I did. I loved my clients, but I didn’t feel like we were providing the kind service we could be providing.”

As it turns out, being left with no option but to move on was just the push Reese needed: “Being young and ambitious, I said, ‘I’m going to do my own thing. It shouldn’t be that hard,’” she recalled. “I was 23.”

Reese decided to start her own for-profit mental health agency, and, in 2017, she launched Ubuntu Care Services. The organization’s focus is on African American clients, and its name, a Zulu word translated as “I am what I am because of who we all are,” focuses on the belief that a universal bond of sharing connects all humanity.

Ubuntu wasn’t an overnight success. For a few years, Reese worked three jobs just to pay for office space. But just as Ubuntu began to feel like a lost cause, things started looking up. “I was about to give up and terminate my lease when I got a notification from UCare, saying I could bill for services.”

That notification, an indication that a large health insurer was willing to take Ubuntu seriously, was enough for Reese to keep at it. In 2019, she received her first paycheck. “I framed it,” Reese said, with a laugh. “I realized I didn’t have to quit. I could live off this work, do this the rest of my life and help my community.” Ubuntu now has seven employees — two clinical directors, a nurse and three practitioners — each with a caseload of 10-15 clients.

In 2020, Reese started a nonprofit called Ubuntu Cares. (The Community Healing Team operates under the nonprofit.) Because she felt traumatized, disheartened and angered by Floyd’s murder, Reese explained that she wanted to create a nonprofit that could somehow help heal and strengthen her community. The murder, and the world’s reaction to it, was, “hard to digest,” Reese said. “I was seeing my Twin Cities, a place where I thought people of color could thrive, be revealed as a place where you’re worried about being killed. I knew I needed to do something.”

Ubuntu Cares and the Community Healing Team have received financial support from several local charities, including the Minneapolis-based Pohlad Family Foundation, which was the first to award the group a grant. Pohlad was, “very generous and very flexible,” Reese said. “They didn’t put a lot of stipulations. They knew we were doing the boots-on-the-ground work — and they were very supportive of our efforts.”

Susan Bass Roberts, Pohlad Foundation vice president and executive director, said she and her colleagues were inspired to support the Community Healing Team after witnessing their response to Wright’s killing: “They played a critical on-the-ground role to ensure people had a space to heal and process their pain.”

Over time, Roberts added, “our appreciation for their approach has only grown. They have established trust with the community, and that is so critical in this moment and to do deep healing work.”

In recent months, Reese and selected Community Healing Team members have been providing services to primary and secondary schools and colleges and universities. At Hopkins West Junior High, Reese has been leading small groups of students in discussions about equity and equality, explained Lindsey Leseman, Hopkins West’s community partnerships liaison.

“I have deep gratitude for Ubuntu’s willingness to imagine partnerships that make a better world possible,” Leseman said. “We can’t do this work alone. We rely on a community coming together, and Ubuntu is a really good example of what it takes to support families and children.”

Huynh-Weiss said that the workshop was a new event at the college, and Reese was called on to create something from scratch, a request she took on enthusiastically. “Marika is one of those people who just needs a spark. I present an idea and next thing you know, she’s like, ‘Oh, yeah. Here’s what we can do about that.’ She’s an activator. The work she does is so culturally fluent.”

While Reese is happy that her efforts are catching on — in 2021 she co-founded another organization, Horizon Autism Center, based in West St. Paul — she’s also willing to admit that there are times when she feels overwhelmed. “When people ask, ‘Can you do more?’ Sometimes, unfortunately, the answer is no,” she said. “We only have so many people. We can only be in so many spaces.”

Lately, Reese has begun to think about her professional future. While it may seem like running so many different mental health organizations is keeping too many plates spinning in the air, she sees it differently. One day, in the not-so-distant future, Reese hopes to bring all of her agencies together under one roof.

“Five years from now, I want to have everything in-house, from children’s services to adults to addiction counseling, to the autism center, adult mental health, play therapy, whatever you can think of,” Reese said. “People are always asking, ‘Why are you getting all these licensures? It doesn’t make any sense.’ But I’m doing that intentionally. I want to be able to be a one-stop-shop.”

That one-stop-shop would be a full-service center where African American clients could bring their whole family for culturally responsive mental health care, Reese said. “It would be beautiful if you could drop your five-year-old off here, go to a group counseling session with your teenager, then do your own thing with addiction or mental health. It’d all be in one place. You’d all be in the same environment.”

This approach would emphasize what Reese sees as “the component of family. Mental health is already stigmatized. I’d like to make it more like, ‘This is acceptable. This is a place to heal,’ and have no judgment.”

What would this center be named? “Probably the Community Healing Center,” Reese said. “I don’t need a fancy name. I’m a literal person. I just want it to be a place where people who don’t feel comfortable seeking care actually feel comfortable. It’s a place that feels almost like home.”