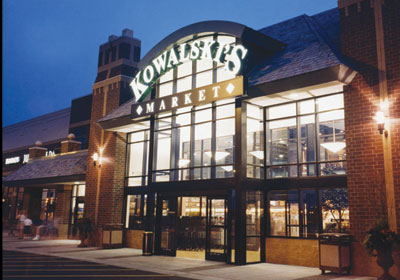 With a mission to “change the typical grocery store experience,” Kowalski’s Markets went from a conventional supermarket business when it opened in 1983 to a health- and quality-focused enterprise featuring an expansive selection of local products, with store designs that challenged the aesthetics of other local options.

“Cub [Foods] were coming in, Rainbows were coming in back then, and there were a lot of the bigger, conventional discount grocers,” says COO Kris Kowalski Christiansen. “We thought it would be best to go off into another direction”

These days, she says Trader Joe’s and Whole Foods are stronger competitors due to their specialty experience and health-oriented approaches, respectively. “We are obviously aware of our competition, but it doesn’t drive what we do,” she says.

Kowalski Christiansen marks progress in continual evolution. Time was, she says, “you had your grocery store, and then you went out to dinner, but there was a gap between those two.” To fill that gap, Kowalski’s crafted premade options upgraded from the typical mayo-dominant macaroni salads available at many grocers. Her stores now also compete with restaurants as a dining option, and deli sales vouch for that, making up the business’s second-highest sales category, narrowly beating produce.

Kowalski’s role as an incubator for new products from local small businesses also gives them an edge. Funky Chunky, Curt’s Salsa, and Salad Girl were all fledgling startups when they began stocking their products, says Kowalski Christiansen. “We don’t ever want to slow that down.”

And there’s more on the horizon: Kowalski’s is currently in discussions with local developers with an eye to open more stores, she says.