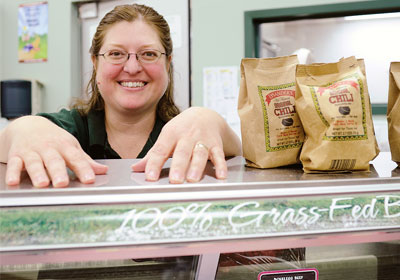 The demand for locally grown organic food, while small, is growing fast. That’s why Burnsville-based Valley Natural Foods, a grocery co-op that opened in 1977, has high hopes for its expanding proprietary product line. It began selling its own branded items in 2007, partnering with local livestock producers to offer fresh, house-cut beef.

“Our first line was called Bubba’s Natural Beef, because we had a meat manager who raised 13 steers for us and named one of them Bubba,” says Charli Mills, Valley Natural’s marketing communications manager. The store now buys grass-fed beef from Hidden Stream Farm in Elgin. It taps another southern Minnesota supplier, Hill and Vale Farm, for traditionally finished beef—sourced from cattle that eat grass most of their lives, then dine on grain for the final few weeks before slaughter. Those suppliers, in turn, work with other local cattle growers to stagger breeding schedules. This allows Valley Natural to offer fresh beef to its customers daily.

With sales of its beef strong, the store has added bacon and ham—both cured without preservatives—as well as turkey, bratwurst, and smoked beef hot dogs. Ninety percent of Valley Natural Foods’ beef and pork products are sourced from farms in Minnesota and Iowa, Mills says, and the co-op was able to earn a grocery industry–standard 31 percent margin on these products.

Valley Natural now is beginning to create its own lines of salsa, scones, coffee, and soups. “‘Bubba’s Natural Salsa’ really doesn’t work, so we came up with Down in the Valley” for a brand name, Mills says. The salsa is available now; the store will sell other products as they are developed. Staff members will introduce the new items at area farmers markets.

“We’re willing to put money into relationships” with local farmers, Mills says. That means investing funds in cattle stock, vegetable seed, and fertilizer. The store would like to buy all or nearly all of what its farmers can supply. That would help support local food producers—and also allow Valley Natural Foods to negotiate the best prices and persuade farmers to pursue products and practices that its customers favor.

Meanwhile, Valley Natural Foods is expanding its market, so to speak. Stillwater’s Rivermarket and Northfield’s Just Foods now sell Valley Natural’s meat products, and the Burnsville co-op hopes that these and other stores will also carry Down in the Valley–branded items.

Valley Natural Foods now has plans to open its own meat-processing plant and an offsite bakery.