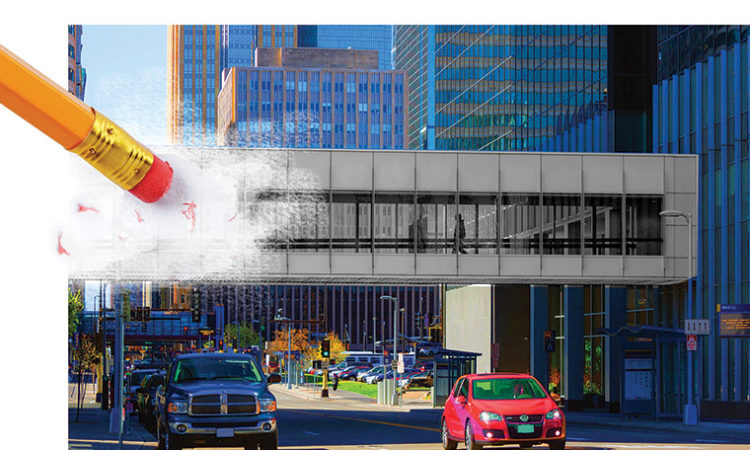 A Downtown Without Skyways

Tearing them down might benefit downtown’s street and retail life, but cost and ownership issues make it hard to fathom.
By Burl Gilyard
August 01, 2017

Are skyways killing street life in downtown Minneapolis? The debate resurfaces periodically amid discussions of urban planning and the overall health of downtown retail, business and safety.

Last year Eric Dayton, a business owner in the North Loop (a skyway-free section of downtown) and a descendant of the family that started Dayton’s, created the Skyway Avoidance Society to promote denizens getting back on downtown’s streets. In an April commentary for the Star Tribune, Dayton issued a call to tear down the skyways. Could it actually happen? It would be expensive.

“I think the cost is infinite . . . I don’t even know that you can put a number to it,” says Steve Herron, principal with the Minneapolis office of Chicago-based Zeller Realty, a commercial property owner and manger. Herron is also a member of the city’s Skyway Advisory Committee, which reviews plans for new skyways.

Herron argues that the total cost is incalculable because he expects that the loss of skyway connections would lead to declines in property values. Beyond the demolition costs, Herron says that there would also be costs for reconstruction, tenant relocation and other building changes to “accommodate entirely new traffic patterns.”

Another issue that would complicate skyway teardown is the dozens of different companies that own the system, most commonly in deals between connected buildings. Downtown landlords would find themselves with second-floor holes in their properties.

“Putting the buildings back together is the hard part,” says Tony Barranco, vice president of development with Minneapolis-based Ryan Companies US Inc., a development and construction company. “You’ve got to re-skin those buildings.”

Deb Kolar, general manager of the IDS Center (for Florida-based Accesso Services), is also on the advisory committee. She says that the group has never attempted to calculate demolition costs. But she does think that skyways could benefit from a little marketing.

“For the most part it’s a great system,” says Kolar. “I think we just need to do a better job of touting its benefits.”

A skyway connection was considered essential for linking the new U.S. Bank Stadium to the rest of downtown. According to the Minnesota Sports Facilities Authority, the skyway from the stadium to a nearby parking ramp cost $4.3 million.

Mark Read, assistant parking manager for the city’s Public Works Department, says that the city owns or maintains 14 of downtown’s 69 skyway bridges, at an annual cost of about $650,000 for the system—meaning little would be saved if they went away.

“If you start the demolition of skyways, I think it would be extremely expensive,” says Read. “Where would you start?”