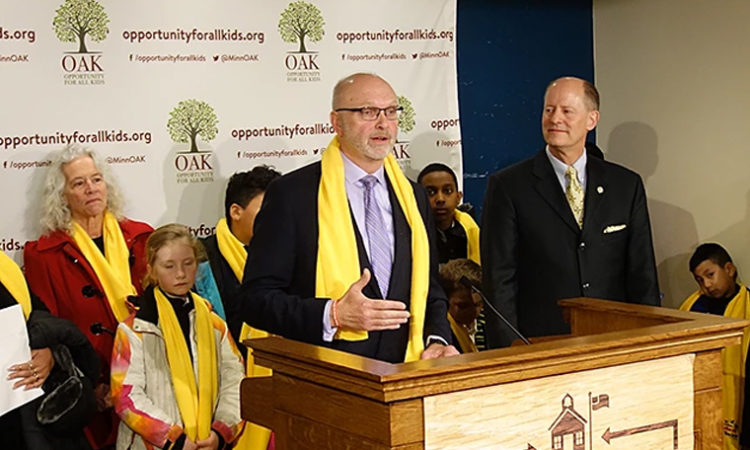 ‘We’ll Fight for This One’: Gazelka Says Bill Creating Tax Credits for Private School Scholarships is a GOP Priority

The Equity and Opportunity Scholarship Act would allow donations to scholarship foundations to be credited against state income taxes. The foundations would use the money to give private school scholarships to low- and middle-income students.
By Peter Callaghan
March 21, 2019

A proposal at the core of the differing education policies favored by Minnesota Republicans and DFLers might end up on the table for end-of-session negotiations between Gov. Tim Walz and Senate majority Republicans.

The bill is called the Equity and Opportunity Scholarship Act, and it would allow donations to scholarship foundations to be credited against state income taxes. The foundations would use the money to give private school scholarships to low- and middle-income students.

It is a version of private school vouchers and tax credits that have been used in other states (and to some extent in Minnesota) that have often raise constitutional questions, though the bill’s chief supporter believes the structure of the proposal would allow the program to pass muster with the courts.

A bigger question may be whether it will pass muster with the DFL House majority or the state’s public school teacher in chief, Gov. Tim Walz.

Probably not. Which is why Senate Majority Leader Paul Gazelka raised the idea of the proposal potentially being part of the back-and-forth that has become an end-of-session ritual in recent years: “Certainly the governor has a lot of proposals that we have not been agreeable to,” he said. “Negotiations at the end are a bit of give and take and this is a high priority for us.”

“We’ll fight for this one,” Gazelka said. “We think it matters for kids in Minnesota.”

How it would work

Providing alternatives to traditional schools and enhancing public school accountability are two central tenets of GOP education policy. In talking about the Equity and Opportunity Scholarship Act  at a press conferenceTuesday, Gazelka pointed to achievement gaps between white students and student of color as a reason to try something different. “I’m willing to do something different to get different results,” the Nisswa Republican said. “Over the past eight years we’ve spent a lot of money doing the same things that we’ve always been doing, with no different results. This bill is a tool that I’m convinced will work.”

Here’s how it would operate: Individuals and corporations could contribute to scholarship foundations, which would have to be registered as 501(c)(3) nonprofit organizations. Donors could then claim a state tax credit of 70 percent of the amount given. As a credit, the money is deducted from taxes owed.

The bill caps how much individuals and corporations could give: $30,000 for a married couple filing jointly, and $150,000 for a corporation. The total amount that could be claimed statewide is $35 million.

The foundations would take applications from families and make decisions on whether the applicants were eligible based on the income standards in the bill; that is, families could have incomes twice what they would have to qualify for free or reduced price lunches. For a family of four, that would be up to $93,000 a year. The parents, not the foundation, would decide where to use the scholarships.

Minnesota already has tax deductions and tax credits related to K-12 costs, some of which apply to private school costs. None are as generous as the opportunity scholarship bill would be, however.

‘It will not happen’

Gov. Tim Walz was asked about the bill after his transportation pitch in Anoka Tuesday and he was not enamored of the idea. “I know this is an ideological issue for them,” Walz said. But, he added, “It will not happen. I certainly am not going to move a big chunk of the education funding into private entities, not even going to the parents of these students.”

A hearing on the bill on Tuesday showed just how far it is from where DFL constituencies are. Two public school teachers and the state school boards association opposed the measure — not because of the details but because of the fundamentals. “Before you give a tax break to corporations and rich individuals who donate to the schools of their choosing, you should first tax them so you can fund all schools,” said Melanie Olson, a teacher from Buffalo.

Officials from Walz’s own Department of Revenue also spoke against the bill. Joanna Bayers, legislative director for the agency, said the Equity and Opportunity Scholarship Act would treat donations to scholarship foundations much more generously than donation to other charities. Charitable donations are deducted from an individual’s income before taxes are calculated, while credits are deducted from the amount of taxes owed.

Sen. Roger Chamberlain, the chair of the Senate Taxes committee and the prime sponsor of the bill, SF 1872, to offer corrections. Donors can’t dictate which schools benefit from a donation, and the bill requires schools receiving scholarship students to administer state or other similar norm-referenced tests and post the results on school websites.

Chamberlain also referenced polling that shows support for such a program, especially among African-American and Latino respondents.

A bill to be heard Thursday would offer a similar tax credit for donations to affordable housing projects. That measure, however, caps the value of the credits at $25 million statewide. Why is that less than the scholarship program? “Education is much more important,” Chamberlain said. “These kids, these families need it. So it’s much more important.”

The bill, he said later, is meant to give low- and-middle-income families the same ability to choose private schools as better off families. He appeared with principals, parents and students from Twin Cities private schools who, wearing matching yellow scarves, are supporting the bill. “All parents need this choice,” said Sheila Young, whose son attended Ascension Catholic School in North Minneapolis and whose grandson attends now. 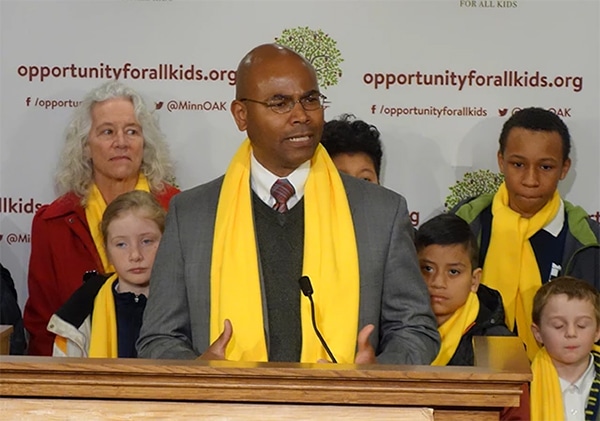 Benito Matias, the principal at Ascension Catholic School in North Minneapolis, said he tracks high school graduation rates of his students. He said it ranges from 95 percent to 100 percent and that 95 percent of his students are what he termed “scholars of color.” (Photo by Peter Callaghan/MinnPost)

Benito Matias, the principal at Ascension, said he tracks high school graduation rates of his student after they leave his kindergarten-through-eighth-grade program. He said it ranges from 95 percent to 100 percent and that 95 percent of his students are what he termed “scholars of color.”

In the Taxes Committee hearing, Sen. Melisa Franzen, DFL-Edina, raised concerns about the constitutionality of the bill: both federal and state. Minnesota’s Constitution mandates that the state make ample provision for public schools, and Minnesota is one of the states that have what is called “Blaine Amendment,” which bans the use of state money for religious schools.

“I would hate to be spending money defending something that, on its face, may be unconstitutional — both by moving money from the general fund to support private school … and secondly by the religious piece.”

Chamberlain said he expects a legal challenge. But he also said he’s received legal opinions that argue the bill would be found constitutional because of its nondiscrimination and accountability requirements, and because the state wouldn’t touch the money or decide how it would be spent.