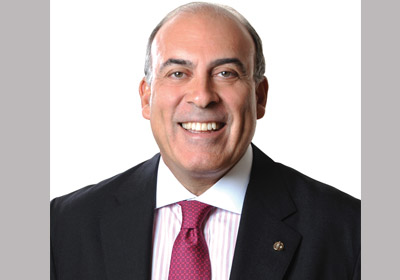 Maplewood-based 3M Company said Wednesday that Muhtar Kent, chairman and CEO of The Coca-Cola Company, will join its board on April 1.

Kent joined Atlanta-based Coca-Cola in 1978 and held a number of marketing and operations leadership positions. In 1989, he was named president of the company’s East Central Europe division and senior vice president of Coca-Cola International, a role in which he oversaw operations in 23 countries.

“We are extremely pleased to welcome Mr. Kent to our board,” 3M Chairman, President, and CEO Inge Thulin said in a statement. “He is a talented and proven global business leader and will bring valuable insight and management experience to the board and our company.”

Kent isn’t the only beverage-industry leader to serve on 3M’s board, which also counts among its directors Robert Morrison, retired vice chairman of PepsiCo.

News of Kent’s appointment came one day after 3M announced a $7.5 billion share repurchase plan. 3M gave no end date for the stock repurchase program, which replaces an existing $7 billion plan from 2011, according to a report by Bloomberg.

The company also announced a 63.5-cents-per-share dividend for the first quarter—representing an 8 percent jump from the same period a year ago. The dividend is payable on March 12 and will go to those who hold shares on February 15. The new payout marks 3M’s 55th consecutive year of dividend increases and its 96th year of steady dividend payments, the company said.

Thulin said that the dividend increase and stock repurchase program “reflect both our confidence in 3M’s future and our commitment to return significant cash to our shareholders.”

The company said that, during the last decade, it has returned $32 billion to shareholders through such actions, representing 89 percent of its net income.

3M’s latest announcements come on the heels of increased profits and record sales for both the fourth quarter of 2012 and the full year. Fourth-quarter net income climbed 3.9 percent to $991 million, while revenue for the quarter rose 4.2 percent to $7.4 billion.

News of the strong financial performance propelled 3M’s stock to an all-time high late last month. It has since climbed even higher and was trading up 1.2 percent at $102.69 Wednesday afternoon.