3 MN Cos. That Are Cleaning Up The Twin Cities 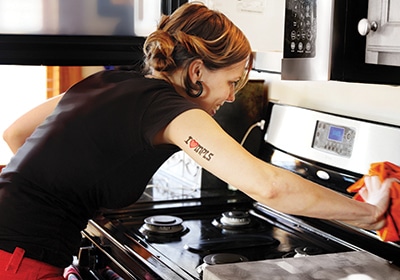 [This is one of three Spotlight stories from the August 2014 issue that focus on the theme “Sustainable Policies = Steady Profits.” Also read about St. Croix Cleaners and Chowgirls Catering.]

Anna Tsantir wasn’t happy. Working long hours at a nonprofit arts organization left her little time or energy for her own printmaking. She needed a change. In 2006, with an initial investment of only $1,500 for a new computer and licensing fees, she and her partner Sam Meyers launched Two Bettys, a green cleaning service.

“The mop and bucket?” Tsantir jokes. “Not that expensive.”

It was slow at first, but word spread and momentum grew. Tsantir says 50 percent of new business these days is through referrals.

Why was being green an important part of their business plan? It wasn’t because customers were asking for it. Mostly, Tsantir says, it was for her own peace of mind. She was already environmentally conscious, but she also didn’t want to inhale chemicals every day. Clients didn’t know much about synthetic versus natural cleaners and wondered why the house looked clean but didn’t smell clean. That’s because the products Two Bettys use are typically fragrance-free. They use various products from different vendors, but all are organic or eco-friendly.

“I’m a firm believer in using products that have been tested,” Tsantir says. She’s tried making her own cleaners, but has yet to make anything that works as well as the commercial products she uses.

With flexible hours and a steady stream of clients, Tsantir has been able to reclaim studio time for her art. She’s also had time to apply for grants, and in 2008 she landed a residency at the Minnesota Center for Book Arts.

“It’s hard work,” she says of her day job. “[But] you don’t feel bad about it at the end of the day,” Tsantir says. “You can do a really great job while you’re there, then you can close the door.”

Cleaners who work for Two Bettys are artists, musicians and theater people who manage themselves, scheduling times that fit their lifestyles. The goal, Tsantir says, is to help them learn how to run their own business.

“We learned the super-hard way,” she notes, about the finer points of taxes and insurance. “They don’t teach you that in art school.”

Aaron Barnell has always been a self-starter. Back in sixth grade he started seasonal businesses mowing lawns, shoveling snow, raking leaves—all on top of his two paper routes. In his adult life, Barnell started as a professional musician. And even when he stepped into a corporate role as the artist residency coordinator at the Walker Art Center, he was still free to manage himself and his job. When his position was cut, it was a no-brainer for him to go into business himself.

He liked taking care of people. So when a few of his “rock star” friends were out touring with acts like Prince, he offered to clean their houses. Word got around. He cleaned his first house in 2004, and in 2006, he incorporated and became Aaron’s Green Cleaning. He hired employees who were like himself: musicians and artists.

“I joined the Wedge [food co-op] when I was 18,” Barnell says, on why being green was an essential part of the business. “I’m not super-granola, but I am a card-carrying member.”

Initially, he purchased his products from the co-op. He believed in the sustainable, organic lifestyle. People started taking notice. And, like Two Bettys’ clients, they wondered why it didn’t have that “clean” smell. Barnell decided to add an aromatherapy side to his products, which he started making himself using essential oils from locally based Veraditas Botanicals. It took a summer of experimenting with different formulas to come up with just the right scents.

“It’s not just the novelty of smelling good,” Barnell says, “but the marriage of high-quality cleaning products that are simple and smell fantastic. That’s become a signature part of the business that I’ll never give up.”

It started as a side job after Marion Dunbar arrived from Seattle in 2010. She started cleaning houses. It was hard at first to build a network of clients.

“I went to people I knew and asked if I could clean their entire home for $25,” she says. “All I wanted was for them to tell others how I did.”

It caught on. Less than a year later, they hired their first employee. Dunbar and her husband, Jesse, talked it over, and she decided to do cleaning full-time. This past year, he joined her in running the company full-time.

They used eco-friendly products from the start because Dunbar’s first client had health issues she didn’t want to exacerbate. The products were store-bought, but eventually they started to make their own—because employees suggested it. Typical ingredients for their formulas include vinegar, baking soda, coconut oil, and infused fragrances such as lime, lemon and grapefruit. For washrags they use cloth diapers, which are laundered by Do Good Diaper Service, another local eco-friendly company.

Employees are a huge part of Happy Earth. Staffed by artists and musicians—by accident, Jesse Dunbar says—the business thrives on mutual support. In fact, the office has a wall covered in thank-you notes employees write to each other.

“They help us with our dream,” Marion Dunbar says. “Our employees help us guide the company so that they feel comfortable and proud of where they work. They’re the company’s foundation.“ Happy Earth is considering creating its own line of cleaning products, with a potential release in 2015, starting with clients first and building from there.

“It’s tight sometimes, but we haven’t had an unprofitable month yet,” says Jesse Dunbar.