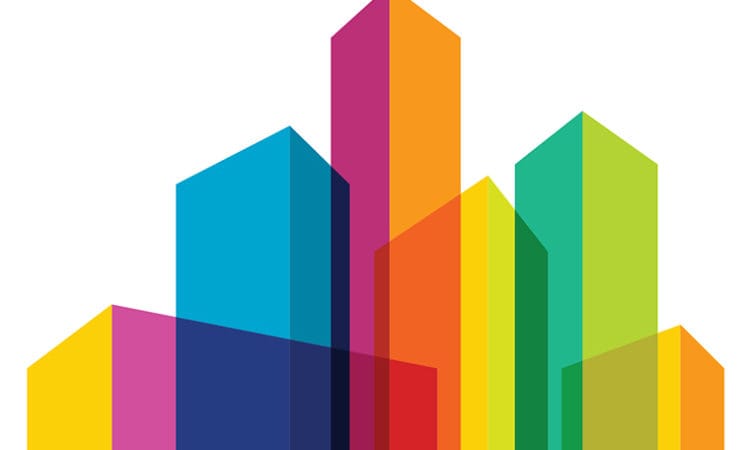 Dozens of remarkable projects were developed in the past year across the Twin Cities and Duluth. Fifty-three projects were nominated for special awards. NAIOP, long known as the National Association of Industrial and Office Properties, selected 14 projects as Awards of Excellence winners. Five of the winning projects are located in Minneapolis, five are in St. Paul and four are in the suburbs.

The judges evaluated the buildings on project development, function and design, architectural integrity, market feasibility, sustainable attributes and unique project challenges. The winning properties, announced at a September event, are profiled on the following pages.

Bill Wardwell, a veteran of the Twin Cities commercial real estate business, is the winner of the 2017 NAIOP Minnesota President’s Award. It is NAIOP’s highest honor, and awarded based on an individual’s outstanding service to the commercial real estate industry’s economic or professional growth, community service and contributions to NAIOP.

Wardwell is executive vice president and managing director of brokerage services for Colliers International in the Minneapolis-St. Paul market.

After earning a bachelor’s degree in finance from the University of Denver, Wardwell served in leadership capacities at three Twin Cities-area commercial real estate firms. He was a vice president at both United Properties and Frauenshuh Companies, and worked a combined 14 years for those two firms. In the brokerage division at United, Wardwell was personally involved with more than 500 lease and sale transactions that totaled more than 5 million square feet. At Frauenshuh, Wardwell led the suburban industrial and office leasing business. He also worked on land acquisition and development projects.

He joined Welsh Companies in 2003. In his current leadership role with Colliers, he is executive vice president of brokerage and capital teams. He develops new business for the firm and is an advocate for the brokerage teams. Colliers announced in April that it was acquiring Welsh.

Wardwell has been an active member of the Minnesota NAIOP Chapter, including service on the board of directors. In 2016, he won the Robert P. Boblett Award, which is the highest honor given by the Minnesota Chapter of the Society of Industrial and Office Realtors.

In his community involvement, Wardwell is a long-standing board member of Partnership Resources Inc., which provides services to adults with developmental disabilities. 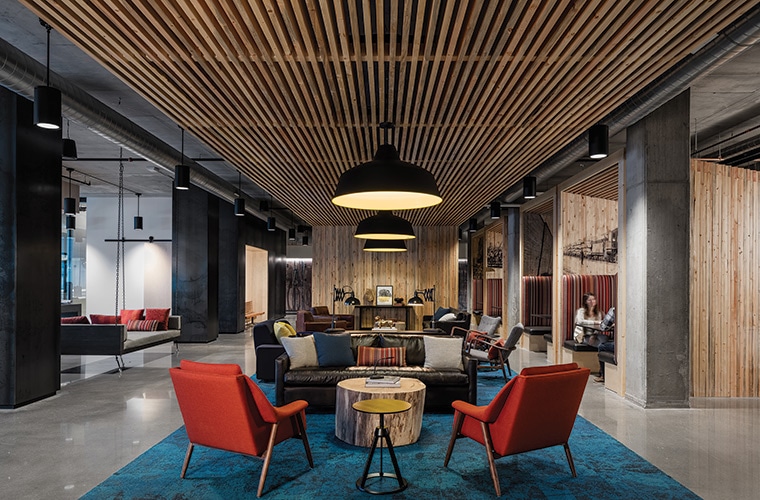 This seven-story structure is considered the largest modern mass timber building in the United States. By taking this distinctive approach featuring heavy timber, the project team aimed to create an energetic, connected and superior work environment. It is a selling point for building tenants, who are focused on recruiting and retaining knowledge workers at a time when there is intense competition for good employees. T3 was substantially leased by the middle of this year. This unique building has attracted media attention from publications in Europe, Japan, Canada and the United States. 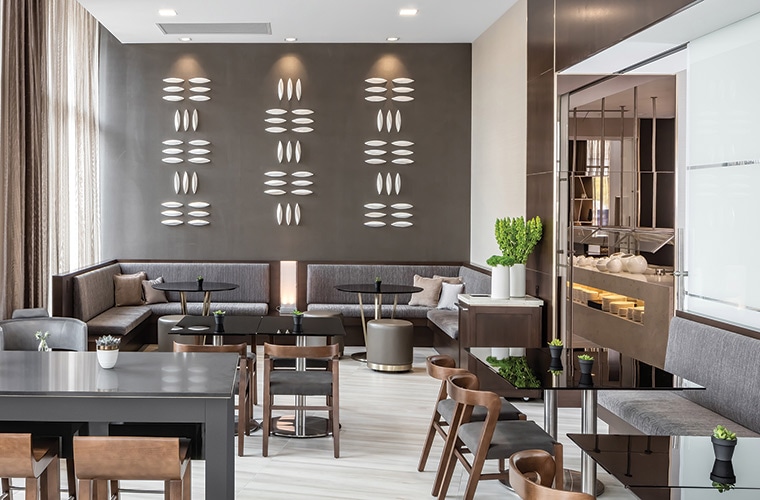 Located in the heart of downtown Minneapolis, this lifestyle hotel is targeted to millennial business travelers. Smart TVs are among the amenities in the contemporary rooms of this nine-story building. While project planners were focused on producing appealing public spaces and guest room designs, they also were operating under the expectation that money be spent efficiently. Among the first AC hotels built in the United States, this hotel was constructed under Marriott’s quality assurance standards. Occupancy sensors were installed in the rooms to ensure that energy for lighting, heating and cooling is not wasted. 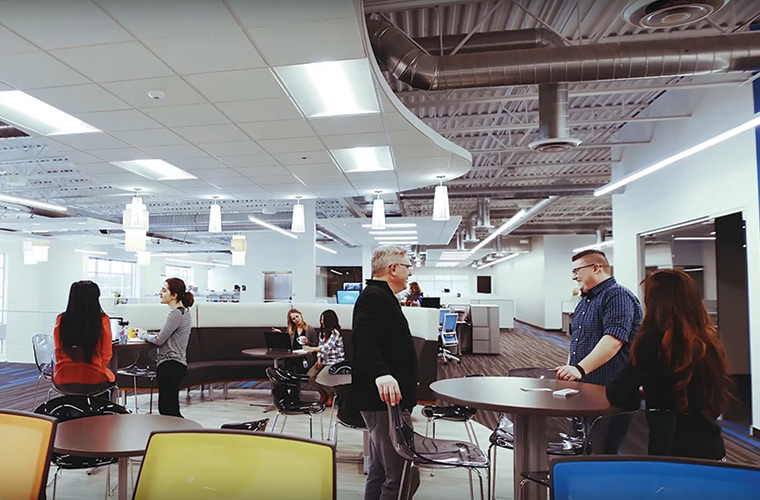 CSM Corporation served as the developer, architect, interior designer and construction manager after Streamworks purchased land for the project. The marketing and printing functions of Streamworks are housed in the production and warehouse portion of the new facility. About 35,000 square feet is devoted to office space on two floors. Architectural precast panels in two colors served to break up the exterior and provide visual interest. The office floors have open ceilings with strategically placed ceiling clouds. Pheasant Ridge Drive was extended as part of the project and a cul-de-sac was relocated. 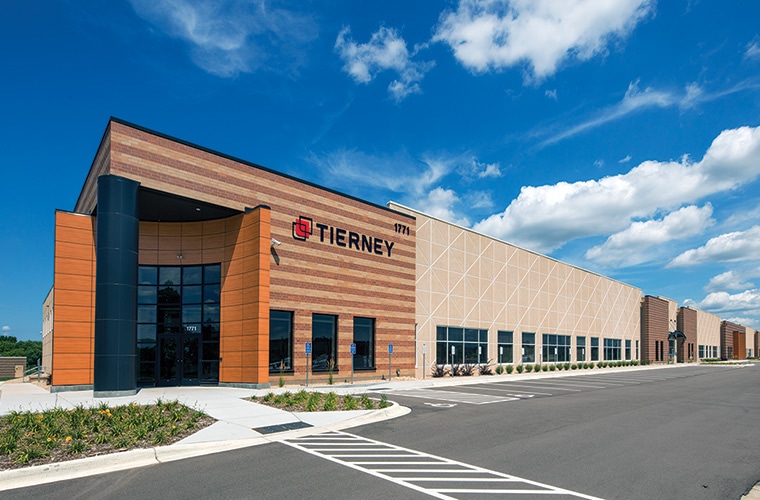 The Midway Business Center is an industrial building constructed on the former site of Midway Stadium, which was home to the St. Paul Saints. The project involved a public/private partnership between the St. Paul Port Authority and United Properties. Site cleanup cost $5.5 million and spanned a year and a half because the soil was heavily contaminated. The building that was ultimately constructed earned a certification making it the most sustainable industrial building in Minnesota. It features a rooftop solar panel system. The project has expanded the city’s job and property tax bases. 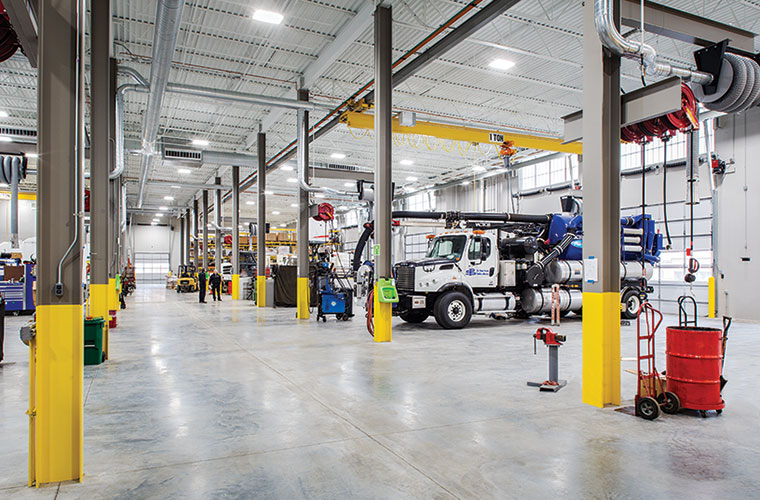 The MacQueen Equipment Group and the St. Paul Port Authority took a brownfield site and developed it into a major facility. The building houses MacQueen’s corporate headquarters, parts and service areas for MacQueen Equipment Inc. and a service center for MacQueen Emergency Group. The site includes 15 full-service bays with in-floor heating. The building features architectural precast concrete that is accented with metal relief panels and colorized metal sun shades. The site was vacant for years, and city leaders hope the MacQueen project will serve as a catalyst for more economic growth in the area. 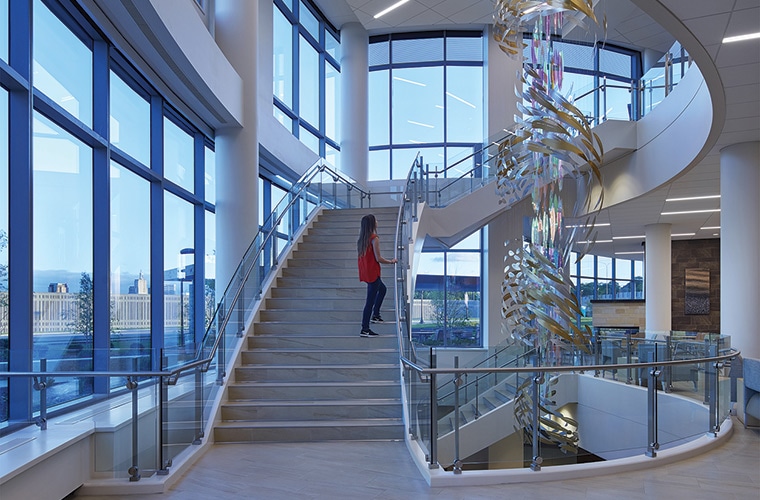 This four-story building is the largest free-standing neuroscience facility in the Upper Midwest. Under one roof, it brings together HealthPartners programs for stroke, spine care, dementia, Parkinson’s disease, brain and spine tumors and other neurological disorders. The structure features a gym-like rehabilitation center, meditation room, family-friendly waiting areas and a dramatic glass curtainwall exterior. Constraints for this project included the site size, unique geometry and the site’s location next to a major freeway and rail line. The building’s undulating exterior was patterned after the curvature of the spine. 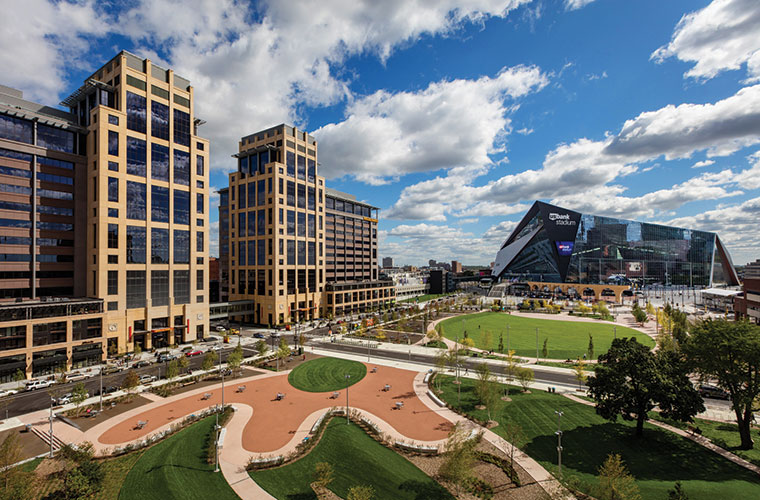 This is the largest Minneapolis redevelopment project that has been completed in decades, and it was conceived as a live-work-play destination. The price tag on this five-block project is $588 million. It consists of two 17-story office towers for Wells Fargo, a multi-tenant Millwright building, a proposed 17-story office building, the Edition residences, the 4.2-acre Commons, a Radisson RED hotel, skyway connections, retail space and a public parking ramp. Emphasis was placed on fusing this new development with its historic neighborhood. More than 5,000 people work in Downtown East, which succeeded in extending the central business corridor. 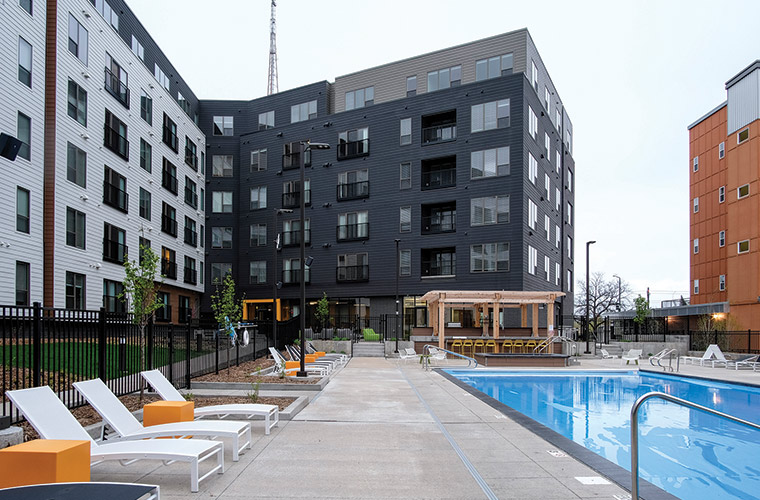 This transit-oriented development features mixed-income housing units and retail along the Green Line in St. Paul. Housing consists of 60 studios, 129 one-bedroom units, six one-bedroom units with dens and 53 two-bedroom apartments with luxury amenities. About 7,000 square feet of retail is included in the development along University Avenue. Public and private partners were responsible for this project becoming a reality. The city of St. Paul, Met Council, and Housing and Urban Development were public partners in the project, which was developed with an eye on reducing automobile use and embracing rail transit. 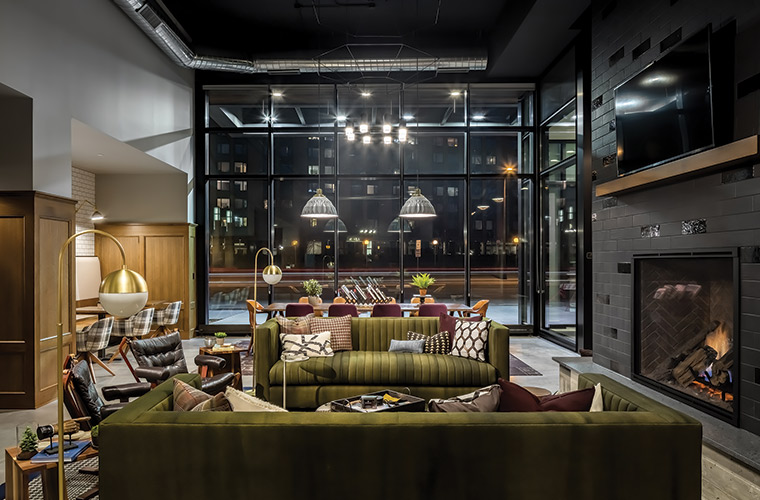 This project fronts Hennepin Avenue and is located between the Federal Reserve Bank of Minneapolis and Whole Foods grocery. It consists of 159 apartment units, 13 walk-up townhomes and a rooftop community terrace. It also includes a fitness studio, sky lounge, two courtyards and a dog wash. The new residential building was planned to wrap around an existing parking ramp. The development’s brick and metal exteriors were designed to complement the historic, industrial aesthetic of North Loop warehouses. About 60 percent of the units were leased by early June. 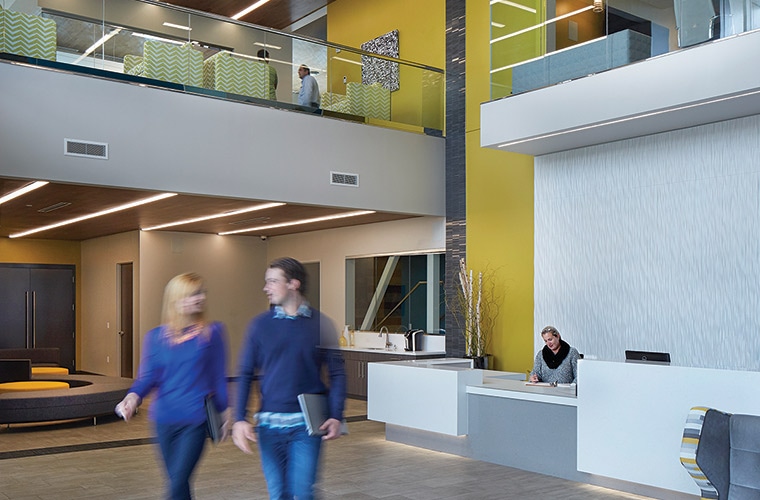 Solutran is a family-owned financial services technology company, which recently built a headquarters in Plymouth. Accommodating company growth and creating an engaging workplace were key priorities of Solutran management. The modern aesthetic was achieved through an exterior design that features metal panels, bricks and glass. The two-story atrium lobby brings natural light far into the building, which provides formal and informal and collaborative and private workspaces. This project was completed on an aggressive timetable and sustainability attributes include a direct pedestrian connection to public transportation and bike racks. 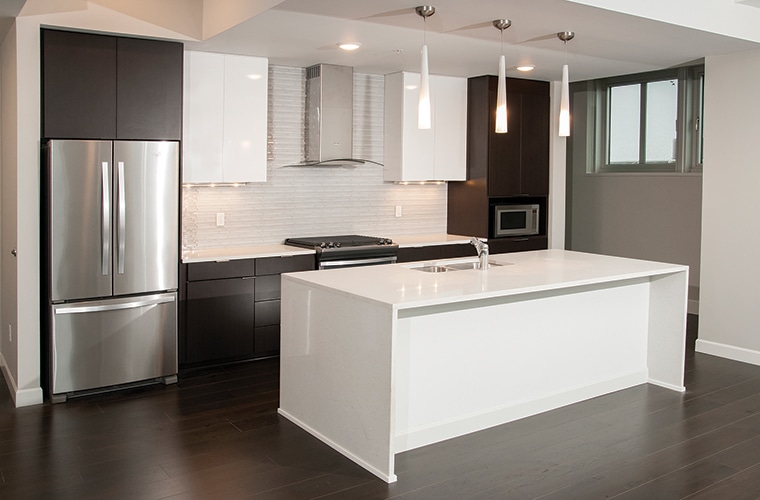 This project involved the redevelopment of the former U.S. Post Office and Custom House that is on the National Register of Historic Places. The structure was built in 1934, with major additions in 1939 and 1961. It has been transformed into 202 luxury apartments and a 149-room Hyatt Place hotel. The complexity of the project was clear throughout its duration. There were two separate ownerships, two financing structures, two general contractors and several hundred workers involved in the project at each juncture. Design work was especially complicated because of the desire to preserve building elements. 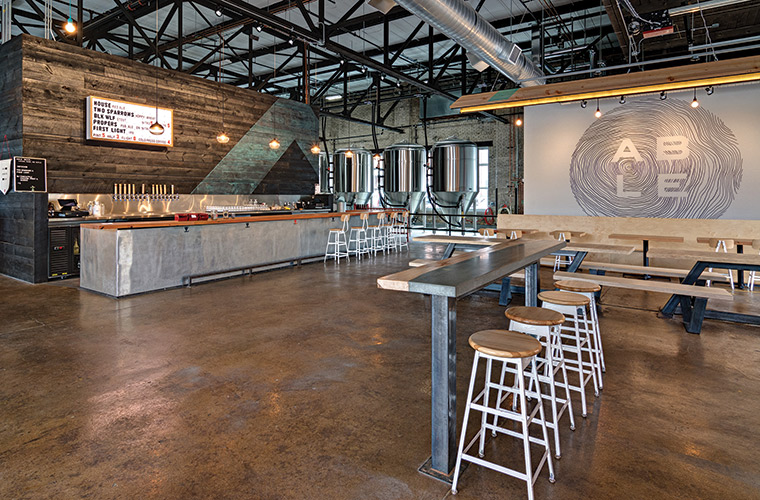 Hillcrest Development bought the former Minneapolis school district headquarters and redeveloped the 1920s-era complex to attract creative-class tenants to the building. This was once a light bulb manufacturing facility and care was taken to retain distinctive elements while producing spaces that would serve the needs of technology and creative tenants in the 21st century. Ultimately, 27 tenants made commitments to the project and more than 700 people work in the Highlight Center. Nearly a year of due diligence was needed to resolve several title and municipal issues, and construction spanned two years. 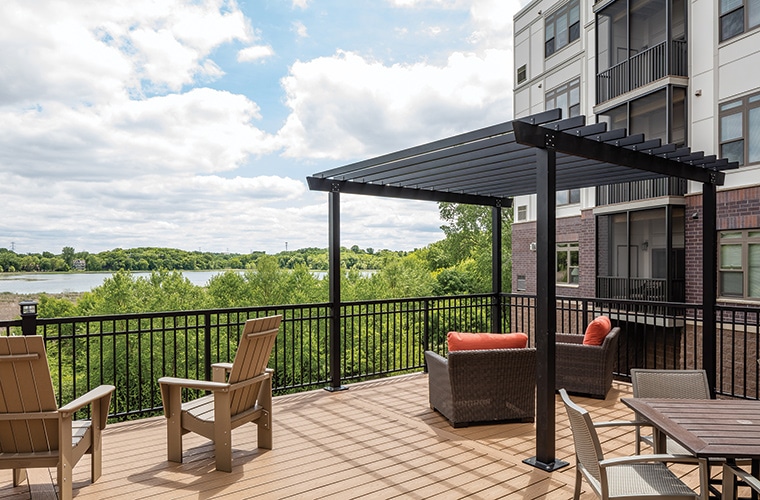 This development is for people 62 and older who want the benefits of traditional home ownership without the hassles of home maintenance. It targets people who want an amenity-rich environment where they can lead an active lifestyle. The interior features reclaimed wood and coffered ceilings. Sixty-five percent of the units were sold prior to the beginning of construction, and a waiting list was in place by the time the development was completed in April. The building is four stories, and it was designed to fit well with the residential neighborhood. 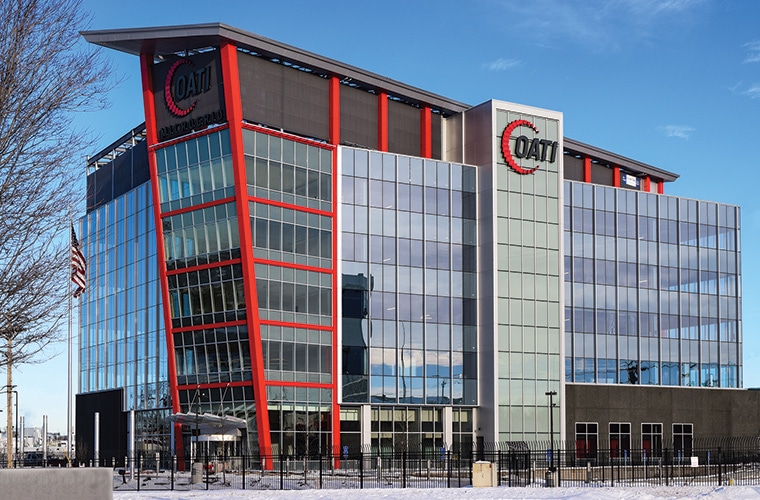 This Open Access Technology International (OATI) technology center was designed to be nearly self-sustainable. It incorporates solar arrays, wind turbines and battery storage to generate on-site electricity and uninterrupted power. OATI provides cloud-based software applications for the energy industry. It purchased 4.3 acres in Bloomington to construct a second campus and data center. Through creation of a microgrid, this facility is the first of its kind in the Twin Cities area. High security features are built into the structure to ensure the data center has effective protections. The building includes a 9,000 square foot training center and a fitness center.

Fourteen NAIOP awards were given to distinctive projects this year. An awards ceremony was scheduled for September 28 in Minneapolis. Thirty-nine other projects were recognized as nominees. Here are the nominees by category: