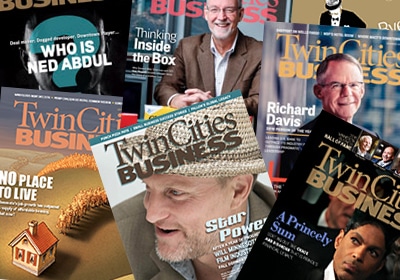 From film to the flight of billions of dollars, we run down what stories caught the most reader attention in the last year.
January 09, 2017

As we usher in 2017, it’s important to reflect upon the moments that defined the previous year. Whether sad, celebratory or thought-provoking, here are the stories readers were most engaged with over the last 12 months:

The question of how Minnesota’s “high-tax” climate may have pushed billions of dollars in taxable income out of the state in recent years was, hands down, our most read and most engaged with story of 2016. With roughly 3,100 taxpayers (who had a median net worth of $17 billion and a median gross estate value of $31 billion) departing or in the midst of departing the state, was this flight of billions in taxable income a one-time event or the start of a trend? According to studies conducted by TCB, the trend shows no sign of stopping in 2017 and beyond.

2016 Person of the Year: Richard Davis

CEO. Salesman. Volunteer. Community leader. Others have said he’s “just a regular guy.” Since moving to Minneapolis roughly a decade and a half ago, U.S. Bank chief executive Richard Davis has been at the vanguard of many major developments. Whether he’s helping to organize the 2018 Super Bowl at U.S. Bank Stadium or serving as a board member for more than a dozen local organizations, Davis has built up a strong reputation for Minneapolis, as well as his company.

Compiled in TCB’s annual list is the “who’s who” of Minnesota businesspeople. Mere power or name recognition wasn’t enough to make the list; each individual must be likely to impact local business, the regional economy and quality of life in 2017. From those at the top of their industry to “emerging” individuals, discover what names and faces are worth remembering for the months ahead.

Of all the tragedies to befall 2016, none hit closer to home than the passing of Prince. Despite being known for his zealous pursuit of copyright violators, it seemed inconceivable that a man with lawyers on speed-dial and litigation on his daily to-do list would have died intestate. Bundled with the complicated situation was the proper distribution of the Purple One’s assets, which included cash, properties, investments, as well as the hundreds (if not thousands) of unreleased recordings locked away in a vault underneath his Chanhassen home. Since TCB’s August feature on the issue, Prince’s home (known as Paisley Park) has been transformed into a museum, while Universal Music Group is believed to have paid about $35 million to be the exclusive publisher of the late musician’s expansive, unreleased catalog of songs. However, the story of Prince and his estate are far from over.

Multiple sources familiar with the matter told TCB of Macy’s plan to shutter its flagship store after more than a century of operation in downtown Minneapolis. Although the Cincinnati-based department store has remained mum on the topic, sources have said Macy’s intends to publically announce the closing after the holiday selling season, with a planned end of operations in the first half of 2017.

The 150-year old company has discovered that selling processed, carb-laden foods to health-conscious millennials may not be the best long-term strategy. So after decades of steady growth, the Golden Valley-based company has been reshaping its portfolio to adapt to consumer tastes. Key acquisitions of natural and organic food companies were made, as well as a move to rid its popular line of cereals of all artificial colors and flavors. Yet, to say General Mills’ “renovation” period has been smooth sailing would be a misstatement. Several times throughout the year, the food company has announced plans to lay off workers or close manufacturing facilities around the globe. To top it off, General Mills has reported $300 million sales drops in both the first and second quarter of its fiscal 2017 year.

Who is Ned Abdul?

The real estate developer has been an elusive, yet powerful figure within the redevelopment of major Minneapolis properties. From bringing the Uptown Theater back to life to transforming the Armory building into an event center, Abdul has (since 1992) steadily been making his mark on the city. TCB took a look into the man who has been known to roll the dice on challenging real estate bets, and why so little is known about him.

Why are Women Bypassing C-Suite Jobs?

According to a 30,000-employee, 118-company study by St. Catherine University, women hold fewer than one out of five executive officer jobs at Minnesota’s largest public corporations. The reason, according to Sheryl Sandberg, chief operating officer at Facebook: “Women see an uneven playing field — a workplace tilted against them.” Nearly a dozen women in executive business positions told TCB why — due to the present situation — they have chosen to either adapt their values or find a new path to success.

Can Minnesota Reel in Hollywood Money?

Despite being the first state to enact a reimbursement program, Minnesota has been struggling for years to bring big-budget film projects to the state. The reason, according to Robert Graf, a longtime producer of Coen Brothers films: “The first and — almost sad to say — only thing you do is go to the current list of filming-incentive states and decide which ones might possibly fit the story you are trying to tell.” With other states (as well as Canada) offering better incentive deals, Minnesota may have to find alternative ways to encourage film studios to spend their money here. (As is the case with Mogadishu, Minnesota, an HBO show that recently shot its pilot in the Cedar Riverside neighborhood of Minneapolis. If given the green light, the show could spend upwards of $50 million in Minneapolis to film the first season.)

Employment opportunities have been booming in Roseau, Thief River Falls and other cities throughout Greater Minnesota. Yet, employers like Digi-Key and Arctic Cat are reaching an “economic ceiling” due to the lack of housing options for new workers. How construction will keep up with worker demand continues to be an issue, especially in places like Shakopee, which recently became home to one of Amazon’s busiest distribution warehouses, and is now in need of 1,000 more workers.