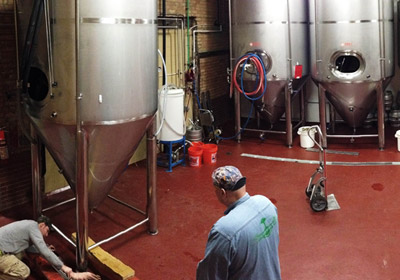 Indeed Brewing Company plans to double its production capacity through a $250,000 upgrade; 612Brew, meanwhile, will open its taproom on Wednesday.
February 22, 2013

Fans of the Twin Cities craft beer scene, which has been growing rapidly in Northeast Minneapolis, have yet another reason to rejoice.

Indeed Brewing Company—which just six months ago opened the doors to its Northeast Minneapolis “taproom” and began distributing its beer to local bars, restaurants, and liquor stores—said this week that it plans to double its brewing capacity in early 2013 in response to “overwhelming demand.” Indeed said that it has attracted more than 10,000 visitors to its taproom.

The company will invest $250,000 to add new cellar tanks and production equipment at its 13,000-square-foot facility. The upgrade will boost annual production capacity from 3,200 barrels to 6,400 barrels.

Indeed currently has about a dozen employees and plans to hire four more by June, with an eye on additional expansion after that, cofounder Tom Whisenand told Twin Cities Business.

Indeed’s beer is now available at roughly 100 bars and restaurants, in addition to its taproom, and the company’s flagship beers—Day Tripper Pale Ale and Midnight Ryder American Black Ale—are sold at about 70 Twin Cities retailers. Once the brewery is upgraded in June, Indeed expects to sell beer at 120 restaurants and between 100 and 120 liquor stores, Whisenand said. The additional capacity will also allow Indeed to experiment with new styles of beer.

Meanwhile, about a half-mile away from Indeed, another local brewery is poised to open a taproom. (Taprooms were made possible by a new state law that allows breweries to sell pints of their beer in on site.)

612Brew will open its taproom at 945 Broadway Street Northeast at 4 p.m. Wednesday. The company said it is planning “special surprise events” to be held throughout the weekend.

612Brew is the anchor tenant in a historic building that is being renovated into a multi-use development called The Broadway. The brewery’s space features exposed brick and timber, polished concrete floors, a bar made from reclaimed bowling lanes, and a mural by local artist Adam Turman. Once The Broadway renovation is complete, the 612Brew taproom will also feature an outdoor amphitheater and rain garden that will expand its occupancy and accommodate outdoor concerts and food trucks.

612Brew first announced plans for its taproom last June, on “6-12-12.” The brewery’s name is a reference to the local Minneapolis area code.

The brewery will launch its taproom with four beers: Six, which is described as a golden-colored American pale ale; Rated R, a “West Coast IPA meets Midwest rye”; Bitter Cold Winter IPA Series #1, the first in a series of single-malt and single-hop India pale ales; and Zero Hour, an “aggressively hopped” black ale.