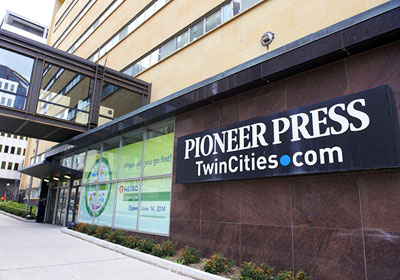 One possibility for cost-cutting by the new owners is reducing the number of days a week the paper is actually printed.
March 29, 2015

Just when you thought every ounce of speculation over the fate of the Pioneer Press had been exhausted, in steps yet another hedge fund with unknown intentions for the St. Paul paper.

This week's news that Apollo Global Management appears to have a leg up on another hedge fund bidder, Cerebrus Capital Management, to buy all of Digital First Media — the PiPress’ parent company — has set off new rounds of rumor-trading and semi-informed analysis.

With neither Apollo nor Digital First (DFM) saying anything on the record, the story remains pretty much as first reported by Reuters — and as best analyzed to date by Ken Doctor, a former managing editor of the PiPress who’s now a columnist for Capital New York.

DFM’s strategy has been to sell all 175 of its properties as a single group rather than piecemeal. As Doctor says he’s confirmed, Apollo is willing to buy at $400 million (a number first reported by Reuters), or 3.75 times earnings, which is a significant but not startling decrease from DFM’s stated expectations when it first began testing the market.

The first round of speculation will be over whether the deal will go down, which could take as long as six months. After that will come the second round, over exactly how Apollo intends to produce a profit in an industry that is still suffering steady advertising revenue declines and has not yet figured out a way to go, well, “digital first” in terms of monetizing its product in an online, mobile world.

You don’t have to read too deep between the lines to figure out that Doctor is more impressed with DFM’s sales chutzpah than with the tactile reality of its media game. He describes DFM’s properties as, “75 daily newspapers and more than 100 non-dailies, or as DFM likes to put it, ‘800 multi-platform products [that] reach 64 million Americans each month across 14 states.’”

Go ahead, you give me a precise description of a “multi-platform product.”

The guy ramrodding the deal: DFM CEO John Paton, a man who “takes pride in assembling a singular company that could be sold to a singular buyer at a price acceptable to his employers [DFM itself is controlled by another equity firm, Alden Global Capital],” writes Doctor. “Consider DFM, at least, a feat of financial engineering.”

The essential takeaway here is that DFM had no intentions of reinvesting in its news products beyond minimal maintenance. In the modern “financial engineering” game, there’s no reason to suspect Apollo will, either, though Doctor seems to believe the new owners (should they actually buy) are looking at a five- to seven-year timeline to, uh, harvest their profit.

Here at street level, Candace Lund, the new executive officer of the Minnesota Newspaper & Communications Guild — which represents the PiPress’ advertising, circulation, editorial and maintenance departments — says she’s still sifting through the same news reports as everyone else, looking for the bona fides.

One “possibility” for cost-cutting at DFM papers already heavily depleted by previous owners’ efforts to deliver predictable profits is reducing the number of days a week the papers are actually printed. The New Orleans Times-Picayune famously reduced itself to a three day-a-week print operation in 2012.

“That doesn’t make a lot of sense to me,” said Lund. “The Pioneer Press is in a much different competitive situation here than a lot of other papers. I don’t see how they could do that. But right now everything is speculation — as it has been for quite some time.”

Outdoors writer Dave Orrick, a PiPress Guild spokesman for moments like this, likewise wants to see some bona fides before anyone starts buying and selling doom, gloom and hysteria. “We’re still here and we’re better than we’ve been in a long time.”

In the sort of upbeat speech he could give at a Rotary luncheon, Orrick likes the improvements the paper has made at the Capitol, with the arrival of ex-Stribber Rachel Stassen-Berger, data-guru David Montgomery and others (including himself) during the legislative session.

The general mood in the newsroom is, “Let’s get to work” and leave the handwringing to others, said Orrick. He concedes that the paper’s “digital first” initiatives, website and mobile, “can be better.” But the paper still enjoys remarkable loyalty east of the river.

The latter is something that has been notable for decades, but that loyalty gets stress tested with every round of reporter cuts and de-contenting. Orrick does say that the guild continues to have informal meetings with possible local buyers. Meaning, deep-pocketed folks who may now be able to deal with an owner, Apollo, willing to sell the paper independent of any other property, though he would not say who — or what kind of numbers may have been bandied about.

“Basically we’re still waiting to see what comes next, as we have for more than five years,” he said. “All this latest story really tells us is that we’ll be living with double the speculation and double the hearsay.”