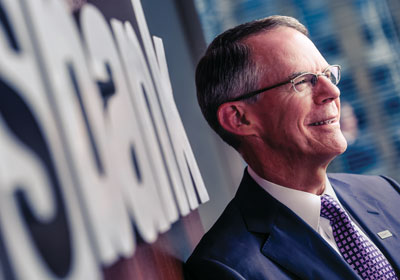 US Bancorp’s Richard Davis Retiring as Chairman of the Board

The bank’s CEO Andy Cecere is set to replace him.
By Jared Goyette
January 18, 2018

Richard Davis, the CEO of US Bancorp from 2006 until his retirement last year, will officially retire from the bank, relinquishing his role as chairman of the board of directors in April. CEO Andy Cecere set to replace him, the Minneapolis-based bank said Wednesday.

Davis, 59, helped what is now known as US Bancorp grow from a regional player to the nation’s fifth-largest commercial bank, and has also been a key civic leader.

One of his most important local contributions is about to see the spotlight: He was instrumental in bringing U.S. Bank Stadium to downtown Minneapolis, as well as pitching the city as the host for the 2018 Super Bowl. Currently, Davis is a member of the Minnesota Super Bowl Host Committee.

David O’Maley, who is set to continue in his role as the board’s lead independent director, thanked Davis for his years of service.

“His most lasting and remarkable success is the positive impact he’s made on every person he’s encountered in banking. He cares deeply about helping people, businesses and communities pursue their most ambitious dreams,” he said in a statement.

TCB told the story of Davis ascension in 2016, when he was named our Person of the Year. In 1993, he was hired by Jerry Grundhofer to head retail banking at the Cincinnati-based Star Banc Corporation, which through a series of acquisitions over the course of 13 years grew to become US Bancorp.

As Davis told TCB, US Bank was able to weather the storm because they avoided investing heavily in risky areas, like subprime mortgages.

“That looks like a brilliant strategy; it was simply we just didn’t do things we didn’t understand,” he said.

Under his leadership, US Bank pushed into key growth areas, like wholesale banking, wealth management and payment processing. Revenue increased by 49 percent during his tenure as CEO, jumping from $13.6 billion in 2006 to $21.3 billion in 2016.

As he explained to MPR after his first retirement as CEO, he believes that US will keep banks under tight regulation, “for the good reasons that we've seen,” but that a possible area of concern for the industry is the growth of institutions modeled like online banking that don’t have the same oversight.

“There are these companies that are doing good work, but they don't have the same regulation, and to the extent that people feel regulation causes safety, then they should be worried. On the other hand, innovation is also part of the growth of this great country, what we're built on, and you want to make sure that regulation doesn't stymie the ability for new ideas to come about,” he said.

Davis, generally seen as important civic leader, has helped raise money and served on the board of numerous nonprofits in the Twin Cities area, including the Greater Twin Cities United Way, YMCA Twin Cities, the University of Minnesota Foundation.

Grundhofer, the man who originally hired Davis, told TCB that he credits him with helping to grow the bank during difficult times, particularly through the Great Recession and the slow growth period that followed.

“He has done just an incredible job, in the most challenging banking environment in my lifetime,” he said.