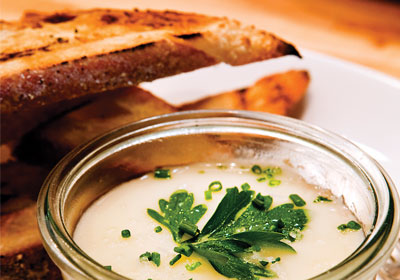 “Confit is the French word for it,” chef and restaurateur Steven Joel Brown explains, but his tone implies that, at Tilia, the humble “potted meat” on the menu will always be potted meat. In his childhood memories, “it was right next to the Underwood Deviled Ham in the grocery store.”

Tilia’s kitchen crew renders fat from the meat that’s on hand—often scraps of the Wild Acres Duck that’s on the lunch and dinner menu, but sometimes pork or goose—then cooks the meat very slowly in its own fat to preserve it. That’s potted meat, and it’s become a surprise bestseller on the menu, perfect for smearing on spears of buttery toasted baguette. The classic ProvenÃ§al spice mix (black pepper, cinnamon, nutmeg, and clove) lingers on the tongue. A close cousin on the menu, Brown’s “faux gras,” is another sleeper favorite. He says he adapted it from a dish made popular by Washington, D.C., restaurateur and friend Michel Richard. Where Richard uses chicken livers, Brown sometimes uses the duck livers he already has in the kitchen to make tiny ramekins of rich-as-suede spread.

What really makes this neo-French dish special, however, is the accompanying eggplant. Brown, inspired by an Indian chutney, cooks the eggplant with honey, tamarind, and a mix of 30 spices until it becomes something else entirely—a complex and almost impossibly smooth dollop of flavor.

The perfectly crunchy sticks of bacon that come alongside it are “a happy accident,” Brown says. Thank the staff, who hit upon the combination one day while they were snacking.