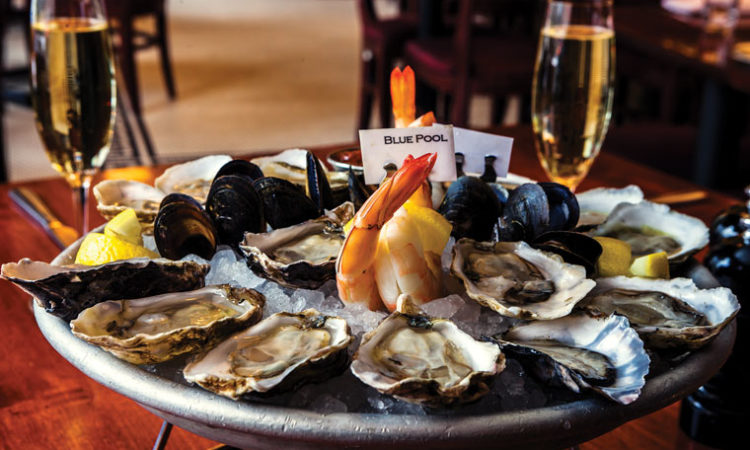 The Taste Of Power

From nitro-charged coffee meetings to fashionable French feasts, here’s where to plug into the Twin Cities power crowd.
March 11, 2017

While Good Day CafÃ© (gooddaycafemn.com) is still a magnet for breakfast meetings, Penny’s (pennyscoffee.com) is the adrenaline of choice for downtown power brokers, denizens of the North Loop and even die-hard Nordeasters. If New York’s lamented Four Seasons was a coffee shop, it would be this, with soaring expanses of glass, marble, stone and steel, views of the iconic Voya Financial building designed by Minoru Yamasaki, and the irresistible buzz of deals in the making. To establish yourself as a regular, arrive early and score a coveted table for two. Fuel the conversation with a couple of La Colombe Pure Black coffees, cold-pressed and supercharged with nitrogen ’til frothy like Guinness, followed by the savory Black Forest ham and GruyÃ¨re crepes.

Strategically situated at the nexus of Edina, Eden Prairie and Minnetonka, Jimmy’s (jimmysmn.com) is a Midwestern version of the Algonquin Club for health care honchos, rock-star commercial real estate brokers and C-suite execs who work and live in the western suburbs. Call ahead to reserve one of the prized oversized booths or settle for a high-top by the window with a view of the comings and goings. Order a round of Algonquin martinis made with High West double whiskey with a spritz of dry vermouth and splash of pineapple juice, and peruse the long list of well-priced happy hour specials, including succulent prime rib sliders and mini crab cakes with lemon garlic aioli. As you wait for your food, say hello to owner Mike Jennings, who’s always in the house, making sure his guests are well-met, well-watered and well-fed.

Located on the left bank of the Mississippi in the heart of St. Paul’s business arrondissement, Meritage (meritage-stp.com) is the Deux Magots of the Twin Cities. Like the famed Parisian cafÃ© where Picasso, Hemingway and Sartre hung out, Meritage is a favorite haunt of east metro architects, attorneys and academics. To experience the brasserie’s distinctive joie de vivre, join the crowd in the high-ceilinged bar or dining room and order a couple of AÃ©roports made with gin, amaro, Aperol and bitters, plus a platter of briny oysters on the half-shell—followed by cassoulet, a crisp green salad and profiteroles for dessert.

On the other side of the river, interior designers, fashion folk and other members of the Lynnhurst bourgeoisie can be found sipping kir royales and admiring each other’s eyeglasses at Saint Genevieve (stgmpls.com ), the South Minneapolis bÃ´ite named after the patron saint of Paris. Order a round of Champagne cocktails and people-watch as you wait for a table. Like a scene from Zoolander, the stylish crowd converses over modern French petits plats including lamb with a Moroccan accent, pommes frites with bÃ©arnaise mayonnaise and tartines with bread from Patisserie 46. After dinner, linger over espresso and luscious chocolate mousse adorned with hazelnut croquant.

For the highest concentration of star power du jour in the Twin Cities, stroll through the Walker Art Center’s much- lauded new entrance and join the crowd of PR execs, art directors, filmmakers and other refugees from the defunct Belle Vie at Esker Grove (eskergrove.com), the new WAC canteen. Start with a couple of Golden Ratio cocktails made with flamed orange and Cazadores Reposado tequila, then order the charred sea scallop crudo with pomegranate and black garlic, or spit-roasted sturgeon with caramelized lemon and hearts of palm with harissa. After dinner, take a spin through the Burnet, Target and Friedman galleries where Question the Wall Itself, an exploration of the social and political dimensions of interior architecture, is on view through May 21.