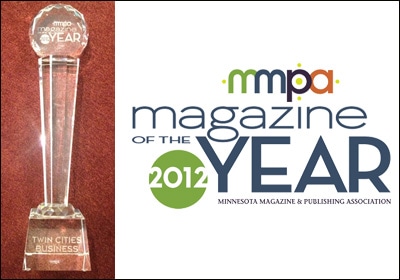 TCB Wins “Magazine of the Year,” 15 Other Awards

Twin Cities Business (TCB) won the distinction of “Magazine of the Year” and took home 15 other awards from the Minnesota Magazine & Publishing Association’s 16th annual Excellence Awards gala on Thursday.

The trade association’s highest honor—Magazine of the Year—recognizes consistent, comprehensive, and cumulative excellence in publishing. Now in its third year, the award is based on point accumulation since 1997, the year of the first Excellence Awards. Magazines from across the state earn points for every award won—three points for each gold award, two for silver, and one for bronze. The magazine with the most cumulative points receives the Magazine of the Year designation. After winning the award, a magazine’s point total resets back to zero—and it begins accruing points the following year that count toward a second win.

The gold awards presented to TCB were:

The magazine won silver awards for overall design; feature article “Full Steam Ahead” from the February 2012 issue; single page or spread design for “Growth Cycle” from the April 2012 issue; and directory for the 2012 B.I.G. Book of business lists.

Overall excellence awards were distributed in several categories. In addition to the one awarded to TCB, Mpls.St.Paul won a gold-level award among general interest publications that have a circulation above 60,000.

There are 110 members of the Minnesota Magazine & Publishing Association, including 55 member organizations, some of which produce multiple publications. Hundreds of entries were submitted for the 2012 awards event, which was attended by more than 270 and took place at the Nicollet Island Pavilion in Minneapolis.