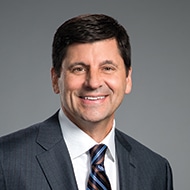 Michael Guyette—now in his third year at the helm of Blue Cross and Blue Shield of Minnesota following a period of leadership instability there—is continuing to work at connecting the insurer with consumers in the new era of customer choice. This year he announced the opening of a second bricks-and-mortar Twin Cities retail store, meant to coincide with 2016 open enrollment. Meanwhile, Guyette is still facing plenty of challenges: For 2014, Blue Cross reported an operating loss of $8.2 million on full-year revenues of $10.1 billion.