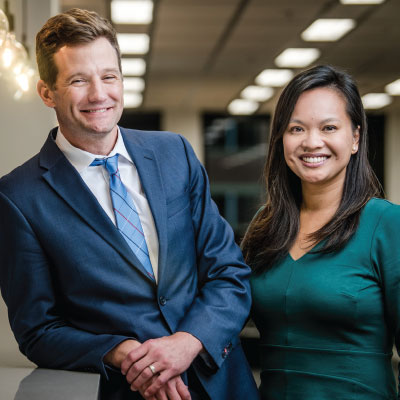 Steve, 2021, Alumni: At DEED, the former Google exec has been a bullish advocate for Minnesota’s entrepreneurs and startups. In the early weeks of Covid-19, Steve Grove became a household name at the governor’s near-daily press conferences. He’s taken a leadership role helping both workers and companies rebuild in the wake of the turbulent pandemic economy.

Mary & Steve, 2020, Overachiever: Any feelings of inadequacy that Minnesota lags behind similar markets in startup formation and investment capital should be assuaged by the arrival of Mary and Steve Grove. Former Google employees based in Silicon Valley, the couple with Midwestern roots (and twin toddlers) arrived in 2018 and quickly immersed themselves in the local startup community and economic development. After taking office in January, Gov. Tim Walz appointed Steve to his cabinet as DEED commissioner, where he is focused on growing the state’s workforce and closing the opportunity gap. Mary is a partner in Revolution’s Rise of the Rest, a VC firm founded by AOL billionaire Steve Case with a mission to invest in businesses outside of Silicon Valley, New York, and Boston. “There’s a lot more momentum and activity in Minnesota than the narrative that’s told nationally,” Mary says. “It is a capital-efficient place to start and scale.” Six years ago, the Groves founded Silicon North Stars, a nonprofit that helps youth from underserved communities in Minnesota pursue careers in technology. They used to fly a cohort out to Silicon Valley each year, but in 2019, they decided to keep its programming here at home. “Minnesota has arrived,” Mary says. “You don’t need to go to Silicon Valley to be inspired.”