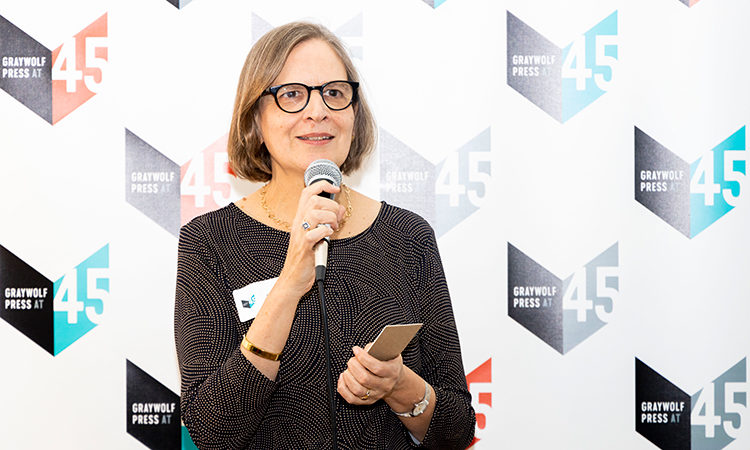 2021, Rooted: Since she took over Graywolf in 1994, Fiona McCrae has turned the press based in Minneapolis’s North Loop into a worldwide cultural powerhouse, its books and authors snagging just about every important literary award in the world—including the Nobel Prize, multiple Pulitzer Prizes, the National Book Award, the National Book Critics Circle Award, the Booker Prize, and more. Graywolf has turned books of poetry into New York Times bestsellers and redefined lyric essays in our time. In this difficult year, McCrae put Graywolf on a two-year strategic plan to get to the other side, but she didn’t shrink her ambitions. “Defensive mode was necessary,” she says. “The question was, how to be generative and come out stronger?” Her answer: using virtual events to grow Graywolf’s National Council, a group of donors and fans who promote Graywolf titles in their local circles.

2018, Overachiever: Long before 2017, Graywolf Press had established itself as one of the world’s pre-eminent publishers. Yet in guiding the nonprofit, which has amassed a seemingly endless series of awards and accolades, Fiona McCrae has clearly reached a new level. Graywolf author Claudia Rankine won the National Book Critics’ Circle award for poetry, Diane Seuss’ volume was a Pulitzer Prize finalist, Maggie Nelson won the National Book Critics’ Circle award for criticism, Tracy K. Smith was named U.S. Poet Laureate, and three Graywolf books are among those competing for the 2017 Man Booker Prize. Pick up a Graywolf book—you can’t go wrong.

2015, Pioneer: McCrae came to Graywolf 20 years ago from the august British publishing house Faber & Faber and has kept the Minnesota nonprofit publisher an internationally recognized independent. Her taste is eclectic and adventurous, and she’s brought attention and awards to authors from around the world. In 2014, Indian-born poet Vijay Seshadri’s Graywolf book 3 Sections won the Pulitzer Prize—evidence that McCrae’s faith in “small” books has big value.