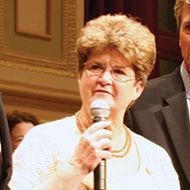 Barb Johnson isn’t worried about being popular. The Fourth Ward rep and president of the Minneapolis City Council is perhaps the last of its old-school DFLers, holding a seat that has been in her family for 46 years. She received considerable tut-tutting from fresh-faced lefty colleagues and community activists when she was the sole vote against repealing spitting and lurking laws, but she’s nothing if not steadfast. Though some have called for her head, Johnson believes she’s representing the best interests of her ward and Minneapolis as a whole. Like her or not, she’s a force to be reckoned with.