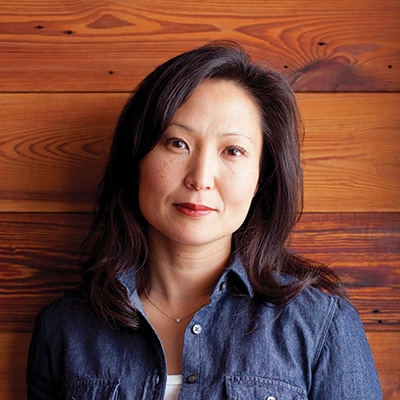 2021, Alumni: Raising a middle finger to fear has become one of the James Beard Award-winning chef’s signatures, along with genre-bending cuisine. So as other restaurants fell all around her, Ann Kim pivoted to takeout, adding frozen pizzas to the menu at Pizzeria Lola and forging ahead with the buildout of the highly anticipated Sooki & Mimi, which plans a 2021 opening in Uptown. She also signed on to lead culinary design at the new Omni Viking Lakes Hotel in Eagan.

2020, Titan: Ann Kim and husband/business partner Conrad Leifur are responsible for a group of the Twin Cities’ most original restaurants, starting with Pizzeria Lola in south Minneapolis and more recently the innovative and much-lauded Young Joni in Northeast, which remains a long wait almost every night of the week. Soon they will open Sooki & Mimi, a Mexican-focused eatery in the old Lucia’s space in Uptown. Kim, winner of 2019’s James Beard Best Chef Midwest award, was recently the subject of a lengthy New York Times profile about her distinctive backstory and Korean-influenced culinary vision, which will likely continue to set the pace for innovation in the Twin Cities.

2019, Overachiever: Ann Kim and her husband and business partner, Conrad Leifur, have pioneered a series of Twin Cities restaurants of brilliant originality. First was Pizzeria Lola in South Minneapolis’ Armatage neighborhood, with its signature French copper pizza oven; then came the evocative, precise, and also pizza-driven Young Joni in Northeast Minneapolis, the latter incorporating more of Kim’s Korean heritage fare. The couple announced this summer that they are taking over the now-shuttered Lucia’s space in Uptown for a Mexican concept to open in 2019. With a new direction in a part of town that has become unfriendly to serious restaurants, the coming year will likely be Ann Kim’s most ambitious yet.