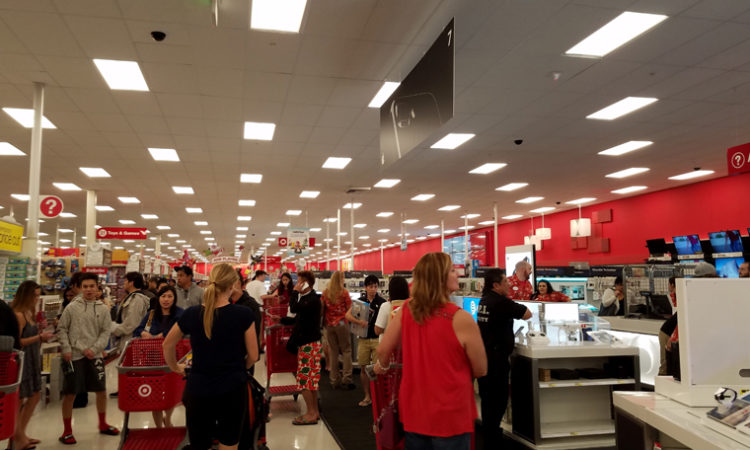 The retail giant will equip employees with devices enabling customers to check out with any employee anywhere in the store. Black Friday hours and deals were also announced.
By Amanda Ostuni
November 01, 2018

Halloween is over. It’s officially November. That means one thing: Let the holiday shopping and Black Friday buzz begin.

Target came out of the gate fast, announcing on Thursday its Black Friday plans, which include introducing entirely new technology aimed at giving customers speedier checkouts.

With new, specially-equipped handheld devices, team members of the Minneapolis-based retailer can scan any item in a guest’s basket and accept payment by credit card on the spot.

This means customers can skip the regular cashier lines and check out with any Target employee they see anywhere in the store. On the busiest days, though, like Black Friday, employee hubs will be located in the most popular store sections, including electronics.

Mark Tritton, Target executive vice president and chief merchandising officer, said in a statement that this capability is one of the company’s “unmatched easy ways to shop.”

Moreover, Target declared its Thanksgiving and Black Friday hours. Stores will open at 5 p.m. on Thanksgiving and remain open until 1 a.m. Friday. They will open again at 7 a.m. Meanwhile, the seasonal tradition of the “Weekend Deals” program kicks off Saturday, November 10 and runs through December 15.

Target has been gearing up for the holiday season for months. In September, the retailer announced plans to hire 120,000 temporary new staff nationwide to assist during the busy season.