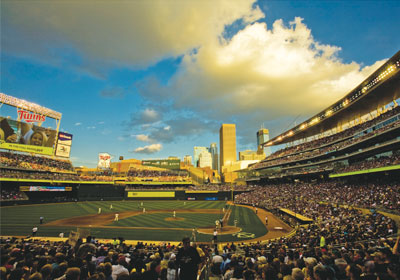 One day, your office overlooks a parking lot, the next, a Major League Baseball stadium—or so it goes for lucky Minneapolis businesses.

When Target Field was built a stone’s throw from his law firm, Bill Hart, a partner at Meagher and Geer, jockeyed for the corner office on the 44th floor of 33 South Sixth. He furnished it with restored seats from the old Met Stadium—signed by Harmon Killebrew and Tony Oliva—bobbleheads, autographed photos, even “a little feast of fake food” with replicas of hotdogs, popcorn boxes, and Coke cups. Whenever the sound of fireworks signals a homerun, Hart swivels in his chair to watch the batter rounding the bases, and has binoculars on hand for a closer look.

Hart has visited many downtown offices and says, “by the greatest of good fortunes, you can see [Target Field] from ours best. Everybody’s clients want to come see the view,” he laughs. “I get interrupted at least a couple times a month.”

A player in the legal push to keep the Twins in town a decade ago, when Carl Pohlad considered selling to the league, Hart now has an unobstructed view of the team he worked to preserve.

“To end up with a catbird seat is pretty rich,” he says. “It’s a lucky coincidence, but a welcome one.”