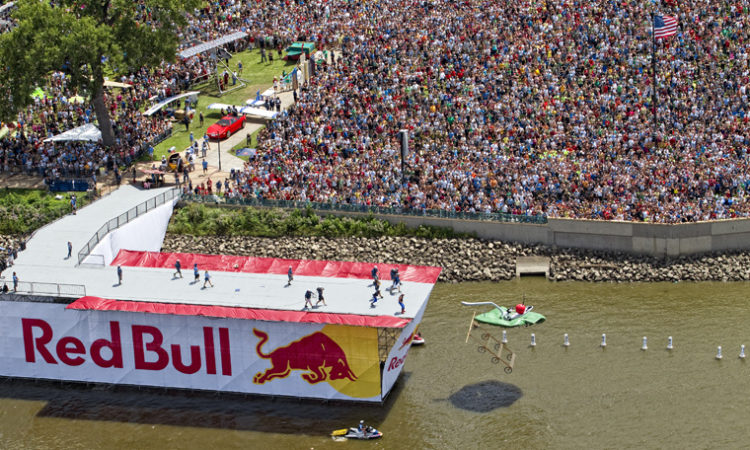 The last time St. Paul hosted the human-powered aircrafts competition was in 2010, when a team set the world record for furthest distance traveled.
By Sam Schaust
March 19, 2019

The oddly entertaining Red Bull Flugtag, a competition that since 1991 has drawn in crowds around the world to witness the launching of high-flying (but mostly dive bombing) human-powered aircrafts, is returning to Minnesota’s capital after a nine-year hiatus.

Official takeoff of the Red Bull Flugtag in St. Paul will be Saturday, September 7 at Harriet Island Regional Park.

Fifty teams will vie to “earn their wings” as they launch their homemade aircrafts off a 30-foot-high platform into the Mississippi River. A panel of celebrity judges will be present to not only score teams on the distance their aircraft travels, but also their creativity and showmanship.

Competing teams tend to model their aircraft after local sports teams and landmarks, music, movies, food, and more. In the 2010 Red Bull Flugtag in St. Paul, one team’s aircraft was designed after the iconic “Spoonbridge and Cherry” sculpture.

“The sky is the limit when it comes to creating your aircraft,” says Levi LaVallee, a professional snowmobiler and Minnesota native who was a celebrity judge when St. Paul last hosted Red Bull Flugtag. “I’m hoping to see a Minnesota Vikings or Juicy Lucy” this September.

LaVallee and St. Paul Mayor Melvin Carter together took to the skies on Tuesday—12,000 feet high, in fact, as they skydived onto Harriet Island Regional Park—to announce Red Bull Flugtag’s return to the city.

“I’ve never done that before,” says Carter. “I called my wife right when I landed.” 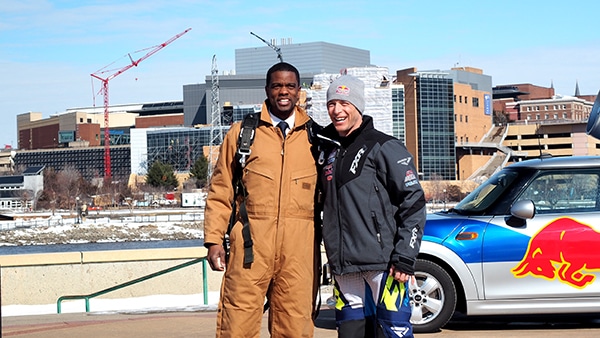 Discussions began last fall to bring Red Bull Flugtag to St. Paul, Carter says, as a way to continue the city’s relationship with the energy drink company after the exit of Crashed Ice, an extreme skating competition, last year. St. Paul had long been the host of Crashed Ice, from 2012 to 2018.

“We love teaming up with Red Bull,” Carter adds with a hope that St. Paul will again host Red Bull Flugtag or some similar event in 2020.

Red Bull, which is based in Austria, divides its U.S. marketing team across the nation, including in Minneapolis—a strategy that allows the company to dig into the values of individual regions countrywide. That local presence most recently pushed Red Bull to sponsor snow art at Target Field during last year’s winter.

Red Bull Flugtag, however, has held 162 competitions around the world since its inception 27 years ago. The first and only time Red Bull Flugtag—German for “flying day”—was held in St. Paul, the official world record was set.

In front of a crowd of 90,000 in 2010, team “Major Trouble and the Dirty Dixies” flew a silver plane 207 feet into the Mississippi River. The record remained unbroken until 2013 in Long Beach, California when a group coasted their Flugtag contraption 258 feet from the point of liftoff.

Adventurous aviators are encouraged to apply online for the St. Paul Red Bull Flugtag. While there is no cost to enter, all team members must be at least 18 years of age to compete.

Interested applicants have until June 26 to submit their entry.