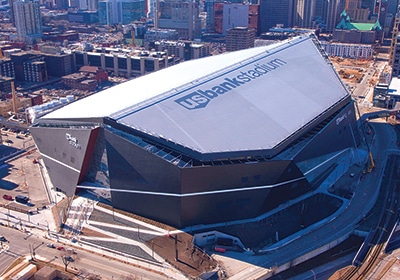 The best opportunities for networking this month.
By tcbmagstaff
September 10, 2016

Sept. 10
Minnesota Touch of Football
Be part of the first charity event held at U.S. Bank Stadium. Get an exclusive tour of the stadium with a behind-the-scenes look at the locker room, main concourse and Delta Sky 360° club. Attendees will also have the chance to watch a celebrity flag football game featuring former Vikings players, ESPN radio talent and local media. Proceeds from the event support the Crohn’s & Colitis Foundation of America’s mission to find cures for digestive diseases.
8:30 a.m., tickets start at $30, U.S. Bank Stadium, Mpls., 651-355-1584, ccfa.org/football

Sept. 12
Open Arms Golf Classic
Join Open Arms of Minnesota for its sixth annual Golf Classic. Golfers will play a Texas scramble format on a challenging world-class course, plus have the chance to win a Nike golf travel cover and a 2016 Mercedes-Benz C300. The top six players will move on to compete in the Mercedes-Benz Dealer Championship Playoff, followed by a cocktail reception and dinner.
10 a.m., $1,400 for foursome, Windsong Farm Golf Club, Independence, 612-327-8028, openarmsmn.org/openarmsgolfclassic

Sept. 21
WIN Conference 2016: Stepping Up
Enjoy a day full of networking and professional development with entrepreneurial-minded women at the Minnesota Women in Networking Conference and Oasis. Participants can hear from a number of inspiring speakers and take part in breakout sessions. End the afternoon rejuvenating in the Oasis with appetizers and spa services.
8 a.m., $189, Golden Valley Country Club, 612-708-6001, thewinconference.com

Sept. 21
Minnesota Recruiters Conference
You and 400 other business professionals can learn new strategies to become more influential in your role and more effective with candidate outreach and engagement. Keynote speaker and best-selling author Lou Adler will teach attendees about some of the highest-impact areas in recruiting, interviewing and closing.
8:30 a.m., $119-$159, Best Buy, Richfield, mnrecruiters.com/events

Sept. 22
Twin Cities Finest Awards
Celebrate 25 of the city’s most accomplished men and women at the fourth annual Twin Cities Finest awards party. The evening will honor their involvement in the community, their success as professionals and their commitment to raising money for the Cystic Fibrosis Foundation. Enjoy food and drinks as you mingle with some of the best and brightest of the Twin Cities.
6 p.m., tickets start at $65, Profile Event Center, Mpls., 651-631-3290, finest.cff.org/activity/cff/tcfinest