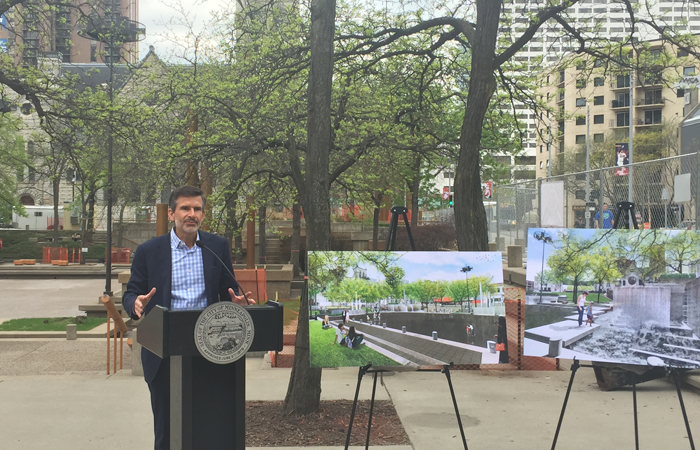 On the heels of Nicollet Mall’s restoration, the 45-year-old plaza outside Orchestra Hall is next in line for a much-needed renovation.
By Amanda Ostuni
May 15, 2018

Months after the completion of the Nicollet Mall renovation, work began this week on another aging downtown Minneapolis landmark. City officials and other stakeholders gathered on Monday to kick off a year-long, $10 million renovation project for Peavey Plaza, on Nicollet and 11th.

“Like all 45-year-old women, sometimes you just need a face lift,” said City Council member Lisa Goodman at the kick-off. “And that is what’s happening to our beautiful mid-century, modern plaza. She is about to get her 45-year-old facelift.”

Built in 1974, and designed by M. Paul Friedberg, the plaza outside Orchestra Hall is widely considered a prime example of modernist architecture and was added to the National Register of Historic Places in 2012. Renovation plans for the sunken, multi-level plaza include adding accessibility features, in compliance with the Americans with Disabilities Act, as well as the return of long defunct fountains and a pool.

“When you have a city that is built on the concept of water and lakes and the river,” Minneapolis Mayor Jacob Frey said at the event, “having a water component in the central core of our downtown is emblematic of everything that we are and everything that we ultimately want to be.”

Shane Coen, of Coen+Partners, the design firm working on the project, said the renovations will include a new series of entry points off Nicollet. The design will also allow people in wheelchairs to get to all levels of the plaza, instead of being limited to the top level, as is currently the case.

Other aspects of the project include making the space adaptable for community and civic events, updated lighting, and more eco-friendly water systems that will use only a fraction of the water used previously. Green Minneapolis, a non-profit conservancy devoted to improving parks in downtown Minneapolis, is helping with sustainability measures, and will be involved with programming when the plaza reopens in June, 2019, to coincide with the Minnesota Orchestra summer season..

“Green Minneapolis’ goal is that every single day during the winter and summer, you’re going to see this plaza being heavily used by the citizens of Minneapolis,” said David Wilson, chair of the group’s board of directors.

Mayor Frey noted that such a construction project does come with some labor pains. Parking on 12th street and periodically 11th street will be affected, as well as a lane closed for equipment movement, during off-peak hours.

But no pain, no gain.